Make Your Mark With Ken Andrews Of Red Swan Studios 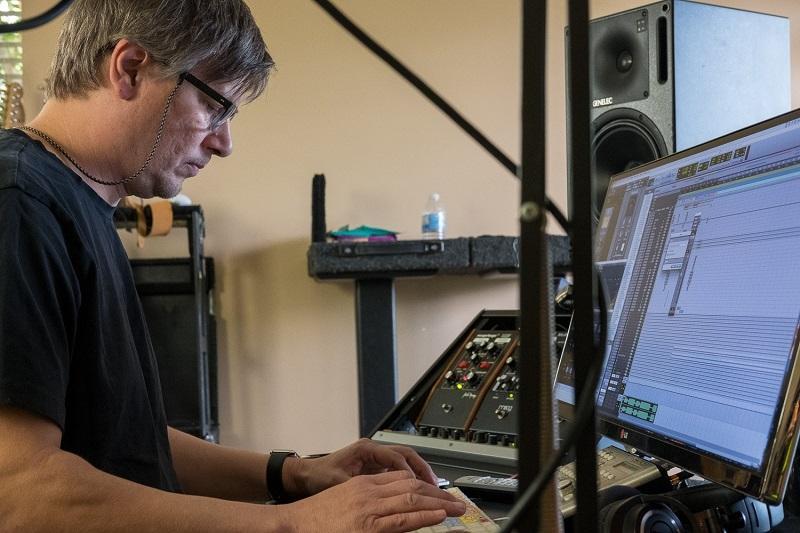 Ken Andrews has always felt at home in the studio. What started as just recording to a four-track in his apartment, eventually grew to the budding engineer/producer and his Failure bandmates decamping to a rental home filled with newly purchased gear. Once there, they would create the highly influential album, Fantastic Planet.

In the time since Fantastic Planet's release, Andrews has been working in major studios and helping craft hit records for Paramore, Jimmy Eat World, Pete Yorn and many more. While working in these studios has provided Andrews with a space to grow his recording and mixing skills, the thought of once again creating his own home base was extremely enticing.

When we recently met up with Ken Andrews at his personal workspace, Red Swan Studios, we sat down to talk about the studio's set-up, his feelings on analog v.s. digital and the lasting impact of his work with Failure. Watch our new Make Your Mark to take a tour of Red Swan Studios and hear more of Andrews' story.

What's the first piece of studio gear that you really bought yourself?
Everything leading up to Fantastic Planet was band gear, guitars and amps mostly, and pedals. When we went into make Fantastic Planet, based on what happened on the first two records, we wanted to buy a bunch of equipment, rent a house, move into it and make a record on our own.

Thankfully, Slash [Failure's record label] decided to let us do that, which was kind of a big deal. This was in 1996, maybe late 1995, we spent $50,000 on recording equipment and we didn't have recording equipment before that. We had my four-track and a [Shure] 58. We went from that to having a fully functional recording studio, granted it was ADAT, but the console was a Mackie, we had some outboard mic pres and an Eventide H3000 as our sole effect.

What was the process of recording that record like?
There were at least a couple of weeks of setting up, experimenting and figuring out how the gear worked. We had to figure out when we could be loud in the house because it was still in a residential neighborhood.

We were very fortunate, and I think this is why this house was used by a couple of bands for a while, the two neighbors that flanked the house were a deaf couple and the other one was a deceased person. There was no one really to complain. Maybe once or twice, the people across the street heard us doing drums real late.

The house wasn't set up as a recording space. It was a pretty modest little house. There was a little living room that was a good-sized space, but the problem was that it was wall-to-wall carpet, so there was no real ambient miking. It wasn't really working.

I had the idea of going down to Home Depot and buying eight sheets of 4' x 8' plywood coated in Formica, which is super reflective, almost as reflective as glass. We put the drum kit on a couple of those and laid some more around the room. It just made the room pop and we pointed mics into them and that's the drum sound of that record.

How freeing was it to be in control on Fantastic Planet?
When I listen to all three records, that record is the best for sure; writing-wise, song-wise, sound-wise. Part of that is just growing as a band, but part of it was the liberating feeling of it. I felt like at that point of our learning curve as a band writing songs, it was the right moment to take the reins and do what we wanted.

If we started a song and we didn't like it and we spent four days on it, we jettisoned it and never finished it. If one song took three weeks, it took three weeks and some of those songs did take three weeks. I should explain, we moved into that house with no material, so we were writing, recording, overdubbing all of that consecutively on a song-by-song basis. So some songs took three days, soup to nuts, and others took three weeks.

What was it like transitioning from being the artist and recording yourself to then working with other artists on their records?
It was fairly easy. I never went to school for engineering and I don't have a background in electronics or anything like that, so I'm pretty much self-taught. The first couple records were a little daunting since I was working in studios that weren't my own and I didn't have time to figure everything out.

What's something that you learned working on the first few Failure records that you still apply to what you are working on today?
I think the number one thing for me is to go with your gut. If it's sounding good and you've done nothing to the sound, don't do anything to the sound. Record it. From being in the studio with other musicians, producers and engineers, I feel like a lot of the time people overcook things. From musical ideas to EQing a snare drum or whatever it is, if it's sounding good and you feel like it's working, it's working and go with it. Don't question yourself and keep the session going.

What's one of your favorite albums that you've worked on throughout your career?
One of the big projects for me early on in the 90s as a producer was the Blinker The Star records I did. First of all, it was very early on and I was still learning a lot. Two, Jordan [Zadorozny], who basically is Blinker The Star, is a really incredible musician and really well-versed in the history of rock and how to get certain guitar sounds. He knew a lot of stuff I didn't know, so I learned a lot from him.

Then we have this other factor, his label situation was pretty cool. They gave him a lot of money to make those records, so I got to work in top studios and work with a lot of top session people. I mostly had only worked with bands. It really just opened my eyes to a lot of different techniques and just being around a lot of seasoned people elevates you. That was a big period for me and it was two albums too.

Check out some of Ken Andrew's work in the studio below, including tracks from Blinker The Star, Paramore and his own band, Failure. For more Make Your Mark, please click here.