Utilizing Audio Over IP With The Burl Audio Mothership And BMB4 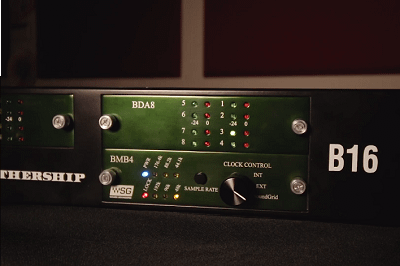 A few months ago, we did a blog on audio over IP systems and their usefulness in the studio, on stage and in post-production or broadcast settings. One of the most interesting AoIP systems on the list was the Burl Audio Mothership, a fully customizable 80-channel AD/DA converter with options for DigiLink, MADI and Dante connections.

Burl Audio's new BMB4 module extends these connectivity capabilities to the Waves SoundGrid platform for both the B16 Mothership and the B80 Mothership. With 64 I/O channels of Waves SoundGrid connectivity, the BMB4 truly opens up a wide range of options for your workflow, no matter which type of studio or live setting you're working in.

Seeing the Light
About 20 years ago, Rich Williams (founder and head engineer of Burl Audio) was working for Universal Audio. He was designing their 2192; a 2-channel AD/DA Converter with AES, S/PDIF and ADAT I/O. The UA 2192 was highly regarded as one of the first digital audio interfaces that captured the tone and warmth of analog recording. It went on to win multiple tech awards, and marked a turning point for Universal Audio.

Williams had seen the light, there was hope for digital audio after all. And when Universal Audio shifted their focus to the current Apollo line (which are great in their own right), Williams took the opportunity to set out on his own and pursue his vision of digital audio with zero compromise. And so, Burl Audio was born.

The Mothership
Will Kahn started working for Burl Audio around the same time Williams began designing The Mothership. He recalls recording drums for Williams through a Neve console and a Studer tape machine as research; “I didn’t even know what to think. It was kind of a 'Hallelujah moment.' The music coming out of the speakers sounded like a record. The console and the tape machine had worked together to make my recording sound like a record. The Mothership is going for that sound.”

"The Mothership is our version of the modern day recorder. It’s an all class-A, all discrete analog signal path, with transformers on the input and custom op-amps on the output, all in a digital interface. Every component is chosen for superior sound quality. It's the best of both worlds. By backing off on the input and not hitting it too hard, you can get that pristine digital sound, but if you want more juice, saturation, and soul, hit it really hard. You’ll get a touch of something different which is the real difference."

“We like to say The Mothership has 'Soul Power.' To us at Burl, it’s not only about looking at things in the scope of frequency response and specs. We believe that analog gear has soul. The analog circuitry of The Mothership has soul, and that's what we’re trying to bring into digital audio. Digital audio has always been flat and sterile and perfect and we’re redefining what that is."

The Burl Mothership works as a modular interface, and comes in packages as small as 4-in/8-out, or as large as 80x80, like the interface installed at Blackbird Studios in Nashville. The B80 Mothership is a chassis with space for 10 swappable "daughter cards” which offer four to eight channels of Burl's iconic analog-esque conversion each, as well as clocking capabilities and AES4 connections.

But the true power of the B80 lies in the interchangeable motherboard. “As tech changes, we can change too. You can always swap out the motherboard for a different format, and keep the rest of your modules.” There are currently four different Burl motherboards to choose from: DigiLink, MADI, Dante and most recently SoundGrid with the release of the BMB4.

"The world is going in the direction of audio over IP. It’s where the future is, certainly. The best part is we’re getting away from expensive proprietary PCIe and MADI cards. Dante is a step in the right direction. It’s a company that everyone has really embraced.”

"I’m really excited about the Waves SoundGrid Motherboard. We've finally put the finishing touches on them and they are now shipping. What’s really exciting is the preliminary tests are showing latency as low as 1.2 milliseconds at 96kHz/sec with no PCIe card."

"Audio over IP is actually quite thrilling. It’s really amazing when you’re no longer point-to-point. Like, when you can have multiple rooms in one studio access gear from all over. If you’ve got a Mothership in Studio A and Studio B, you can pipe tracks for a mix from Studio A over to Studio B to use a certain piece of gear by networking it, which is amazing.”

The Burl Mothership is a great solution for engineers who’ve felt there's something missing from the digital audio landscape. It combines the character of analog audio with the flexibility of modern IT.

If you're interested in learning more about which Burl Mothership configuration would best fit your needs, contact one of our Audio Consultants via email or by phone at 888.653.1184.