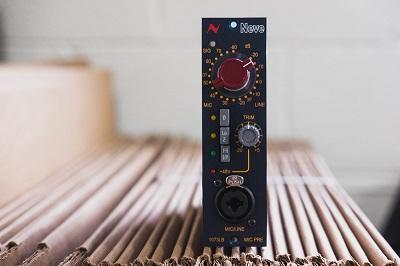 The Neve 1073 is without a doubt one of the most beloved mic pre/EQs in the history of the recording industry. Since its birth in 1970, when Rupert Neve outfitted his A88 console with the first version of the module, engineers and producers have been transfixed by the grit and bite it can deliver to tracks.

While the 1073 has seen many different variations, versions, and replicas, none have made more of an impact than the Neve 1073LB. This 500 Series-sized version of the 1073 offers the magic of the original's sound via a 100% discrete audio path and the same design as the classic circuit. Imagine getting the all analog sound of a Neve 1073 for under $1000. It's a reality with the 1073LB.

Never heard the Neve 1073LB in all of its power and glory? In our new demo below, Vintage King's Bryan Reilly shows off what the mic pre is capable of doing on vocals, acoustic guitar, electric guitar and drums.

If you have any questions about the Neve 1073LB or any other version of the 1073, please contact a Vintage King Audio Consultant by email or by phone at 888.653.1184.
Products in this Article
Categories: Product Reviews & Videos
Tags: AMS Neve
Posted By: Eric Allen