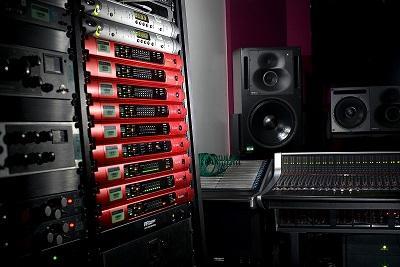 “The entire facility is connected through RedNet,” says VCC Teaching Lab Supervisor Joe McBride. “RedNet provides us with a complete, Dante-ready networked-audio ecosystem. RedNet gives us the most flexible system imaginable for connecting all of our studios and the systems in them.”

Focusrite products are also used as the headphone monitoring tool of choice for students working at VCC. The RedNet AM2 stereo Dante interface is featured in every studio and allows performers to receive their own custom headphone mixes. These custom mixes can then be sent to students working in other studios that are also connected to the Dante network.

“Rednet is ideal for Educational Institutions as it leverages Dante AoIP technology to increase resource flexibility and reduce deployment costs. Since most schools are pre-wired with Cat5e or better cable, we can use Audio-over-IP with that existing network and pipe audio between rooms.” states Vintage King Audio Consultant Chris Bolitho. “The alternative would be costly and complicated multi-channel copper wiring between rooms, requiring schools to anticipate every scenario and change in their teaching program that might come up over the lifetime of the equipment and allocates a large amount of budget to wiring.”

Whether it's using a classroom as a live room, sending multitrack audio from a performance space to the studio, passing along audio resources in a lab setting or sharing a vocal booth between multiple control rooms, everything is easier and more flexible when using Focusrite RedNet gear in a Dante network.

In addition to ease of use and flexibility, students at VCC stand to benefit from working at the forefront of network technology. With the boom in AoIP systems across the world, VCC instructors will be able to teach the principles behind Dante and other audio networks, an important skill set for the next generation of studio engineers.

If you're interested in learning more about how Vintage King's Chris Bolitho can bring Focusrite RedNet and Dante technology to your EDU institute, please reach out to him via email or by phone at 818.237.9181.