Vintage King's Introduction To Mastering In The Box 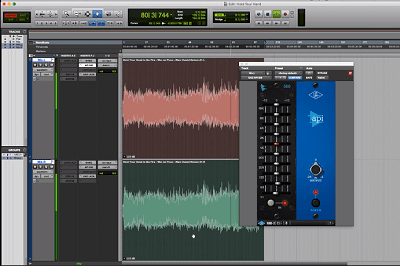 Mastering is a dark and mysterious art. It’s performed by sage-like engineers with super-human ears and years of experience. They take great mixes and somehow make them even better. They’re able to make the lows deeper, the midrange more punchy, and the highs more brilliant.

How? What are their secrets? Patience, Padawan. All will be revealed in time. But first, we must answer an age-old question...

Mastering is the last step of music production. It's the process of balancing the stereo mix of a song and optimizing it for various media formats. Mastering is equal parts creative and technical. It’s about divorcing yourself from the individual parts of a song, and assessing it as a whole.

Some plug-ins actually offer all of these features in a single suite like iZotope Ozone. Other manufacturers create mastering bundles with individual plugins for each job, but no two mastering chains will ever be exactly alike. Each song requires something unique.

Mastering Equalizers
The first stage of mastering is typically equalization. Balancing the frequency spectrum is one of the most important parts of the process. Proper tonal balance allows you to achieve translation on any system.

Some mastering EQs are colorful and bursting with character, while others are neutral and surgical. Regardless of the tool that you use, it should be done with a light touch. Every move you make when mastering affects the entire song, not just one instrument — so be gentle!

First, focus on using subtractive EQ to clean up any problem areas in the mix. Most often, this includes using a high pass filter to remove sub frequencies. Other common problems include boominess in the low-mids and harshness in the highs.

Mastering Compressors
The next in the mastering process is usually compression. Some engineers choose to apply compression before equalization. As always, remember, there is no right or wrong way to make music sound better.

Mix bus compression is used to enhance the dynamic range of your mix. It helps “glue” instruments together, and make a track “breathe”. But how? Witchcraft? Maybe. But the rest of us pay special attention to the compressor settings.

Like everything else in mastering, compression needs to be subtle. Try using low ratios (<3:1), and only compressing a few dB during the loudest parts of the song. This will help balance the loudest and quietest parts, instead of smashing everything into smithereens like Metallica.

When setting the attack time, start by turning the dial all the way to one side, depending on whether you’re going for more punch or more control. Then, slowly start to turn it in the other direction until you start to lose the character you’re going for.

When setting release time, it’s common to start fast and slowly turn it down until the meter starts bouncing in time with the song. You should be able to see the compressor fully engage on kick and snare hits, and return to 0 just before the next downbeat.

This makes it feel like the compressor is “breathing,” and creates a more musical feel. For a more aggressive sound use a faster release time, and for a more controlled sound use a slower setting. Alternatively, most bus compressors feature an “auto” setting which dials in the release time automatically.

Some engineers choose to use multiband compressors instead of (or in addition to) mix bus compressors. These offer more control over the sound by allowing different settings for multiple frequency bands.

Harmonic Saturation
Saturation plug-ins and harmonic exciters are kind of like sprinkles. They add a little bit of life and color by enhancing the flavors that are already there. They’re basically ear candy.

In the old days, mastering engineers added saturation by carefully calibrating their master tape machines. Thanks to Slate, Waves and Universal Audio, engineers have several tape machine emulation plug-ins to choose from, such as the Ampex ATR-102, Studer A800 and J37.

However, if you’re looking to add harmonics without the added effects of tape, there’s a wide array of plug-ins to choose from like PSP Vintage Warmer 2, Fab-Filter Saturn, and Sonnox Oxford Inflator.

Stereo Enhancement
Stereo enhancement is typically one of the last effects applied during mastering. When done correctly, it makes a mix feel wider and more focused through psychoacoustics. However, when overused it can be difficult to maintain mono compatibility.

Most DAWs feature their own stereo enhancing plug-ins, which can also be used to reduce to stereo width of a recording. Equalizers can also be used to achieve similar effects, especially those with mid-side processing capabilities like the Brainworx bx_digital V3.

Limiting
Finally, the last signal processor in your mastering chain should be a brick-wall limiter. Limiters are used to prevent clipping, and increase the average level of a track closer to 0dBFS.

Setting a limiter is similar to setting a bus compressor in terms of attack and release. However, instead of a ratio, which is usually fixed at infinity:1, you’re given an output setting. This is used to set the maximum output level from the limiter, which is typically set to -.1dBFS as a safety to prevent DAWs from clipping the signal.

The amount of gain reduction applied by the limiter is largely based on genre and taste. Some genres call for more aggressive limiting, while others may only use it as a safety net to prevent the occasional heavy snare hit.

Metering
While the limiter should be your last signal processor in the signal chain, a dedicated plug-in for precise metering is often used as well.

Your DAW likely provides basic metering on each channel strip, but these plug-ins offer more advanced readings like RMS levels, LUFS levels and even phase correlation. Some of these plug-ins also offer advanced monitoring options like summed-mono.

Dabbling In The Dark Arts
Very few truly understand the dark and mysterious ways of the mastering engineer. But now that you know the tools they use to create their masterpieces, you can begin practicing their craft. Welcome, to the dark side...

During Vintage King's recent Road To Vinyl video series, we partnered with Universal Audio to show how a song can stay in the box when going from demo to vinyl. To gain more insight on how mastering can be done in the box, watch the video featuring world-class engineer Eric Boulanger using only Universal Audio plug-ins when mastering the song from the Road To Vinyl.