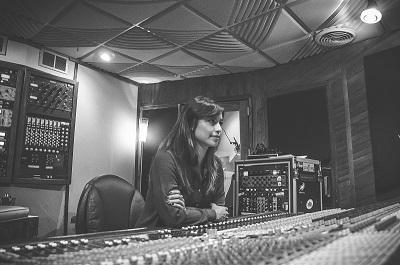 Shani Gandhi is an Australian music producer/engineer based in Nashville, Tennessee. Although she started as an assistant for legendary engineer Gary Paczosa, they’ve been working side by side for the past several years, splitting recording and mixing duties equally.

Best known in the Americana and folk genres, Shani has worked on sessions with artists like Alison Krauss, Parker Millsap and Pony Bradshaw. In 2017, she received a Grammy Award for Best Folk Album for her role as an engineer on Sarah Jarosz’s Undercurrent. The same year, she and Gary were both nominated for the Grammy Award for Best Engineered Album, Non-Classical.

While on a break from working in her studio, Shani sat down for a chat with us about getting guitar sounds. Shani is known for getting natural, organic guitar recordings and she explains how she gets those sounds in her own words below.

“It all starts with pre-production. If a band is established I check out their previous work. Not to compare myself to that, but to get an idea of how the artist likes to hear their music. How live are the vocals? How much reverb is there? How loud are they compared to the guitars? I just like to get myself in the mindset of that genre, especially since I don’t only work in one particular genre.

Then I try to imagine what mics will bring out what I’m hearing, or what I want to hear. Sometimes I try to find a different part of their voice that hasn’t been captured before.

Just before the session, I try to tailor the studio to suit whoever I’m working with. Maybe they’re young, maybe they have kids, maybe they’re whiskey drinkers, maybe they’re foodies… Whatever they need to be able to open up and bare their soul to me. I can only capture what they give me, so I create an environment that makes them comfortable enough to open up and give me something good.

For instance, when we were recording Sarah Jarosz’s Undercurrent, a lot of it was done live, which can be difficult to pull off, sound-wise. Gary and I would have much rather captured the vocals and acoustic guitar separately so we could treat each instrument as we please, but we got a better performance recording her live.

Plus, we’re so close with Sarah that we know how to make her comfortable when recording. A particular session for that record, I remember we had just gotten back from dinner and we were a couple cocktails deep. We turned all the lights down and had her quickly do five takes of a song that we had been having trouble capturing.

The song “Take Another Turn” was actually recorded in three different areas of Gary’s studio, at three different times of day (over a two week period), with three different signal chains. For the final version, we went with the take she recorded on the couch in the control room. She actually brought her friend into the studio for that one, which I think helped put her in more of a performance headspace.”

Acoustic Guitars
“First of all, let me say that Gary is the king of acoustic recording, and I don’t want to take credit for anything I learned from him. We typically co-engineer most records, which is only possible because we’ve worked together for so long, it just sort of naturally happened that way. I started as his assistant and he just gave me more and more responsibility. We know each other's processes and where the other person excels.

When we record acoustic guitars, our go-to mics are the Neumann KM54s. We use a stereo pair, usually in a spaced pair configuration, pointed towards the fingerboard. Then we’ll make adjustments as needed, like if it needs more wood sound, or more finger picking. Gary always says aim a microscope at what’s going on. Sometimes we’ll add an extra mic low on the instrument just for something different, should we want it later.

If we’re recording guitar and vocals together we’ll use an AEA R88 for the room mic. Our go-to mic for Sarah is a Blue mic if she’s playing quietly, but for a louder song we’ll go with a dynamic like the SM7 to pick up less of the acoustic.”

Electric Guitars
“When recording electric guitar, I like to have a variety of amps ready to go at all times. I'll usually split the tone up into two or three different amps. Most of the time it will be one kind of crunchy sounding amp and a warmer sounding amp. I'll use a ribbon mic like the RCA BK-5B on the crunchy amp and a more-detailed mic like a Neumann U67 on the warmer amp.

I usually just use a Vintech X73 preamp with a Distressor there to catch any peaks. I try not to use EQ or compression when tracking guitars. Between the guitar, the pedals, the amp and the cab, there’s enough processing going on just dialing in the tone. I’d much rather just go in and get my ears blasted to find the right mic position.

Parker Millsap’s electric guitar signal was split into two smaller tube amps, and both he and I would shape the tone (him at the guitar, me at the amp) until we found something that suited the song. Usually, a classic Marshall or Vibroverb paired with his go-to amp, a late 70s Fender Champ. He liked to make the Champ really fuzzy so I think by the end of the session I switched from a condenser to a big fat tube mic to help round out the edge.

I like to get the mics pretty close, about an inch away from the fabric. For a darker tone, I’ll move the mics further out to the side of the cone, and for a brighter tone, I’ll move them more towards the center.I like to get the tone right in the room first, then check that the recorded sound matches what I’m hearing. I find it much easier to shape tone at the amp than with any outboard EQ. I will, however, check the waveforms in the DAW to make sure that everything is in phase, and move the mics accordingly.

Mixing
"When I mix electric guitars, I start by picking which mic I prefer and make it my “main mic” and pan it wherever sounds best. Then I’ll take the other mic, turn it down, pan it farther out or to the opposite side, and maybe put a 20-200ms delay on it to help create space. It’s really helpful when you’re working on a song with only one guitar and you want to fill the space out a bit.

If I’m looking for more grit, I’ll use Soundtoys Radiator. I’ll use that on acoustic instruments too. Anytime I want things to sound more raucous, even for bluegrass and folk. Maybe I’ll add a little reverb or delay, whatever suits the song, but sometimes I’ll get to the end of mix and the guitars won’t have anything on them at all. It just depends.”

Check out some of Shani’s award-winning work with artists like Phoebe Hunt, Parker Millsap, and Sarah Jarosz: