The Synths And Drum Machines Behind Early Detroit Techno 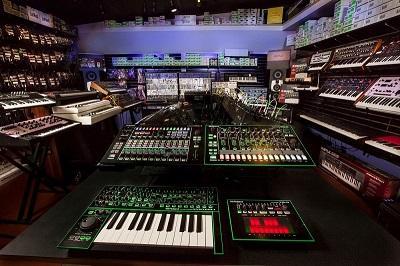 Like all good things in life, techno music can be traced back to Parliament-Funkadelic.

The story starts in the early 1980s with three high-school students from Belleville, Michigan; Juan Atkins, Kevin Saunderson and Derrick May. The trio, who would become known as the “Belleville Three,” would sit around for hours listening to electronic and funk music on a late-night radio show called "The Midnight Funk Association" on WGPR, hosted by underground DJ, The Electrifying Mojo.

After hearing "Flashlight" by Parliament-Funkadelic, Atkins bought a Korg MS-10 synthesizer and started cutting tracks on his cassette player.

Atkins: "When I first heard synthesizers dropped on records it was great… like UFOs landing on records, so I got one... It wasn't any one particular group that turned me on to synthesizers, but 'Flashlight’ by Parliament was the first record I heard where maybe 75 percent of the production was electronic."

Later that year, the Belleville Three booked their first set and prepared to debut their new, experimental electronic music. Life would never be the same again.

May once described Detroit techno music as “a complete mistake...like George Clinton and Kraftwerk caught in an elevator, with only a sequencer to keep them company.” Now, almost 40 years later, their influence can be heard on countless hit records across multiple genres. Not bad for a group high school kids in their parent’s basement.

In honor of this weekend's Movement festival in Detroit, we want to celebrate "Techno City” by looking back at the gear that made it all possible.

Also released in 1978, the Korg MS-20 was the big brother of the MS-10. It featured two VCOs, and more advanced modulation features. In 2013, Korg reissued the MS-20 in a smaller, modernized packaged with USB connectivity.

Roland TR-808 Drum Machine
Produced from 1980 to 1983, the Roland TR-808 is one of the most influential drum machines of all time. For the first time, users could easily program their own rhythms using the built-in 16-step sequencer instead of using preset patterns. Unlike other drum machines of the era, the 808 used analog synthesis to produce drum sounds, as opposed to using pre-recorded samples.

Although the TR-808 is best-known for its contributions to the history of hip-hop, it was also highly influential in the development of Detroit Techno. In 2017, Roland reissued the TR-808 with updated features including an LED display, MIDI and USB connections, and a built-in speaker.

Yamaha DX7 Synthesizer
Originally released in 1983, the Yamaha DX7 was the first commercially successful digital synthesizer. The DX7 utilized FM synthesis to create a distinctive sound that can be heard on countless hit records throughout the 1980s.

To this day, the DX7 is one of the best-selling synthesizers of all time and although Yamaha ceased production in 1989, Propellerhead recreated it as a rack extension for Reason called the PX-7 Synthesizer and Arturia has their own DX7 model called the DX7 V.

ARP Odyssey Analog Synth
Released in 1972, the ARP Odyssey was designed to be a portable, affordable “performance” synthesizer. The Odyssey is essentially a scaled-down version of the ARP 2600 semi-modular analog subtractive synth. The Odyssey features two oscillators and is capable of creating sawtooth, square and pulse waveforms with oscillator sync.

ARP released three different versions throughout the years before stopping production entirely in 1981. Luckily, Korg released a reissue of the ARP Odyssey with modernized features in 2015.

Roland TB-303 Bass Line
The TB-303 is a bass synthesizer produced by Roland from 1981 to 1984. Although it didn't see much commercial success, cheap second-hand units were adopted by electronic musicians, which were then used to build the foundations of Detroit Techno.

Designed by the same mind behind the TR-909, the TB-303 uses a single oscillator to create a sawtooth or square wave, which is processed by a low-pass filter and shaped with an envelope to create it’s iconic "squelchy tone.” In 2003, Roland released a digital emulation called the Roland TB-3 Touch Baseline.

The Sequential Circuits Pro-One is actually a low-cost monophonic version of the legendary Prophet 5, a polyphonic (five voices) analog synth with digital patch memory. Although it was the more stripped-down design, the Pro-One significantly outsold the Prophet 5 due to its low cost. Smith has gone on to expand on both the Pro-One and Prophet 5 designs with the release of the Pro 2 and Prophet-6 (full-size and desktop version).

The Detroit Sound
There’s no denying it, these devices shaped the sound of Detroit Techno. While the genre is always growing and evolving, it can be inspiring to pay homage to the past using some of the original tools of the trade. It's humbling to think about how much the pioneers of techno were able to create using such limited resources. Check out some classics from the genre below and see what you can do with these vintage analog synthesizers and their modern counterparts.