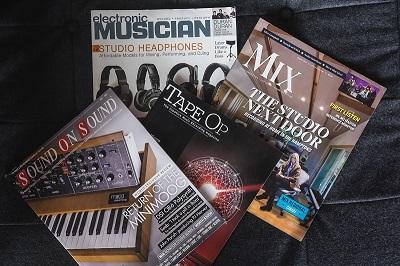 Things move fast in the world of audio production. If you stop to catch your breath you may get left behind. One of the best ways to keep up with the ever-changing landscape of the audio industry is by subscribing to trade magazines, which are written specifically for audio engineers like you.

A few weeks back, we covered books on recording and mixing, but today we'll be looking at some of the most popular audio trade magazines in circulation. Don’t worry, they have digital versions too. Now, go read something and learn before your next session!

Sound on Sound is the world’s premier music recording technology magazine, and was founded by Ian and Paul Gilby in 1985.  Every issue includes feature articles covering a variety of topics on the recording arts and sciences—like their “Inside Track” series which interviews artists and engineers about their latest songs, giving readers a behind-the-scenes look at what goes into making a record. Often subtitled “Secrets Of The Mix Engineers,” these features include a detailed explanation on the signal processing used on the track, as well as screenshots and quotes from the mix engineer.

Their “Classic Tracks” articles take an in-depth look at what went into making some of the greatest songs of all time, like AC/DC’s “Back in Black”, Peter Gabriel’s “Sledgehammer”, and Tom Petty’s “Learning to Fly.” Every article includes interviews with the production team—from the artist to the engineer to the producer.

SOS also includes a number of features specifically designed to help their readers—like “Playback” and “The Mix Review”, which offers professional critiques of tracks made by readers. Their “Mix Rescue” articles allow readers to send in multitrack sessions to have them professionally mixed by the SOS team, along with a full breakdown of the process. Their “Studio SOS” series follows the SOS team as they remodel a reader’s studio, and give tips and tricks for users to incorporate into their home studios.

The Sound on Sound website also includes a robust user forum, complete with a Q&A section where readers’ questions are researched and answered by the editorial team, as well as a Classifieds section. Plus, some of the articles are available for free online! Subscriptions are available in both print and digital formats here.

Back in the days of analog recording, the “tape operator” was in charge of controlling the tape machine during recording sessions. They would take instruction from the engineers and producers in the room, and learn about the craft by being a fly on the wall. Unlike some other recording magazines, Tape Op's primary focus is not on reviewing equipment. Crane says Tape Op is about “education, creativity, and learning how to make great recordings with whatever tools you have access to.” They focus on long, in-depth interviews with engineers, producers and musicians, allowing readers to feel like the tape op for the session, “hanging out in the studio and learning the trade from the seasoned vets working in the studio.”

The magazine has a series of collections focusing on topics like recording specific genres, mastering, interviews with session musicians, using programmers and synthesizers, DIY techniques, and a special section specifically dedicated to Brian Eno. The best part? Subscriptions are available in both print and digital formats FOR FREE here!

Mix
Mix Magazine is “the world's leading magazine for the professional recording and sound production technology industry,” and was founded in 1977. Every issue includes tips and techniques for making great music, gear reviews and interviews with today’s top artists

Their “Classic Tracks” series is essential. It includes interviews with artists and engineers on the recording process of tracks like “Enter Sandman” by Metallica, “Can I Kick It?” by A Tribe Called Quest, and “Walk This Way” by Aerosmith. They also feature facility spotlights, which go behind-the-scenes in some of the biggest studios around the world, like Sylvia Massy’s Studio Divine, Power Station in New England and The Village in Los Angeles, as well as regional highlights for popular facilities on the East Coast, Midwest, the Pacific Northwest and more.

Mix also covers topics in live sound, including gear reviews, venue spotlights, and interviews with touring engineers, musicians, and production staff. Similarly, as if that wasn’t enough, Mix has an entire department dedicated to sound for picture. They write facility spotlights for audio post-production facilities, as well as interviews with sound engineers who have worked in film, television, video games, and other forms of new media.

And, of course, Mix offers news, reviews, and how-to guides on all of the newest gear in their technology section. Subscriptions are available in print and digital formats here, but many of their articles are available for free online.

Electronic Musician
Electronic Musician is a monthly magazine featuring gear reviews, audio tutorials, loops and samples. Originally published in 1975 as  Polyphony Magazine with a focus on synthesizers, Electronic Musician covers all aspects of music production including performance, recording, and technology, from the studio to the stage.

Don’t let the title fool you, Electronic Musician is for more than just musicians. Every issue includes product news and reviews on the latest equipment, as well as tips, techniques, and insights from a variety of musicians and producers.

Because EM is written for performers and engineers alike, their “How-To” section features articles on DJ production, live sound, recording techniques, and even advice for landing a career as an electronic musician. Subscriptions are available in print and digital formats here, but many of their articles are available for free online.

Recording Magazine
As another essential mag to check out, Recording Magazine has been around for over 30 years and is still kicking out tons of great info. In addition to product reviews and news, they have a great column called Recording's Readers' Tracks, which allows you to listen to the work of budding music makers and gain insight into their recording process. Engineer and producer Marty Peters listens to the recordings and offers up his opinion on each track.

Recording Magazine puts out 12 issues a year and has both print and digital versions available here.

Performer Magazine
Performer Magazine was originally published in 1991, and has been a resource for independent musicians ever since. Published monthly, Performer primarily focuses on DIY advice for unsigned and independent artists. They also provide tutorials, tips, and tricks for topics like booking shows, touring, music contracts, music licensing, and promotion.

Subscriptions to Performer Magazine are available in print and digital formats FOR FREE on their website.

Now that you’re familiar with all of the most popular audio trade magazines, the only thing left to do is subscribe! Just remember, reading about music is like dancing about architecture, so make sure you spend just as much time working on your craft as you do reading about it. Things move fast in the world of audio production, after all.