All Sound Upgrades Workflow With Gear From Avid, ADAM Audio And Trinnov Audio 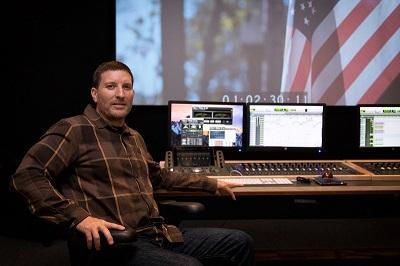 All Sound is a North Hollywood-based post-production space helmed by Nick Couscouris, a veteran in recording and mixing for advertising campaigns, films, TV shows, sports and more. Prior to his recent work on Happy Ending With Nando Vila and A Quiet Place, Couscouris teamed up with Vintage King's Chris Bolitho to bring in an incredible package of new gear to All Sound.

Dubbing his workflow as "streamlined with constant creativity," it was clear from the beginning that Couscouris wanted a set-up that would enable him to work quickly and keep ideas flowing. With that in mind, Bolitho and Couscouris envisioned a centerpiece in the new space with two Avid S3 control surfaces flanked by two Avid Docks. Each surface alone is a powerful tool, but the combination of the two enables you to use some timesaving custom controls.

"The compact design and clean look attracted me to the S3, along with the ease of the gliding faders and panning ability of Pro Tools Control via the app," Couscouris says. "Avid and Pro Tools have made editing and mixing easier by combining hardware and software to form the current audio mastering environment."

For the monitoring portion of the post-production facility, an impressive package of ADAM Audio speakers was put together after Bolitho suggested products from the brand. Three ADAM Audio S3X-Hs, eight S1Xs and two Sub12s are now in operation at All Sound.

"I went with the ADAM Audio speakers because of their size. They are small cabinets with a powerful punch. The S3X are clear sounding 3-ways with virtually no ear fatigue. They are very loud and have a great sound," Couscouris states. "Once they were installed into the space, they filled it out and still had plenty of headroom."

Another element of the new set-up at All Sound includes several pieces of gear from Trinnov Audio. Couscouris and Bolitho opted to employ the Trinnov D-Mon 8 Optimizer and 3D Microphone, which when paired together are capable of offering multiple tools that are ripe for use in any post-production facility.

For those not familiar with Trinnov, the D-Mon is first and foremost a monitor controller. By adding the 3D microphone into the mix, the two pieces of technology allow you tailor your monitors for the type of mix that you're working on and for the room you are listening in.

"It's really helpful in limiting the amount of gear needed in a rack while making it easy to switch thru many room configurations," Couscouris says of the Trinnov gear. "This was important since we had limited space for equipment on the stage. The D-Mon app which controls the Trinnov with an iPod and Wi-Fi can be used for speaker routing and room volume control with Mute/Dim."

No matter what project comes next for All Sound, Couscouris and his crew are ready to attack it with a nimble workflow, thanks to gear from Avid, ADAM Audio and Trinnov.

If you're interested in a full-system package for your post-production facility, contact Chris Bolitho via 818.237.9181 or by email.