A Glossary And Guide To Sound Check 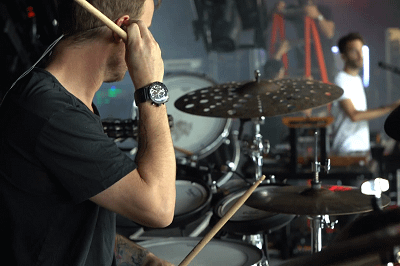 A lot of work goes into putting on a great concert. It can take days, weeks or even months of preparation to make sure that everything goes smoothly. When it's time to sound check a band through a venue's live sound rig, it's important that you have a solid grasp of what's going on and the day's schedule.

While every show is different and some have more moving parts than others, there are some basic terms that apply to all levels of gigs. Check out our Live Sound Glossary below and learn more about a few of the key elements of sound check that will help you get each act sounding just right.

Advance: Shortly after booking the show, the performing artists will be in contact with the venue to arrange the details of the show like set times, stage plots, and input lists.

Call Time: The production crew arrives early to set up the stage, assemble the backline (musical equipment provided by the venue), and prepare the sound and lighting systems.

Load In: Performers arrive, unload their gear and start setting up. This begins with the headliner and works backward to the opener.

Support Line Check: Depending on how much time is available, supporting acts may be given a full sound check. But, it’s more likely that they will only have time for a line check (check each channel for signal). It’s common for engineers to dial in the mix for support acts during the first few songs of their set.

Doors: The venue opens to the public.

Change Over: A brief period in which the production crew tear down the equipment used for the opening act, and re-set the stage for the next act.

Change Over: A slightly longer period in which the production crew tear down the equipment used for the direct supporting act, and re-set the stage for the headlining act.

Headliner: The headlining act performs the longest set of the night.

Tear Down: Strike the stage, load up the gear and get ready to do it all over again tomorrow.

Clearly, there’s a lot to talk about when it comes to putting on a live event. Let’s start with what goes on during sound check.

Once the headlining performers arrive they check-in with the stage manager, who directs them where to unload and set up their gear. Depending on the venue there may be stagehands on site to help. Some performers like to bring their own techs.

The production crew and the performers (or their crew) work together to set everything up as closely to the stage plot and input list as possible. After plugging in and powering on, it’s time to make some noise.

The performers assemble on stage, but before diving into their first song, the front of house engineer will set levels for each microphone, one at a time. Most engineers start with the drums, typically the kick, then the snare and so on. After checking each individual drum mic they usually ask the drummer to play the whole kit to get a feel for how everything is working together.

It’s important that the performers don't play over one another during this portion of sound check. It can be really difficult to dial in the correct settings if there’s a lot of noise on stage.

After checking the drum mics, the front of house engineer will work their way through the rest of the instruments. That includes bass, guitars, keyboards, vocals and any other signals you may be sending from the stage, including backing tracks.

Check 1, 2. Check, 1, 2.
After each line is checked and every performer has a rough monitor mix, it’s time for a proper sound check. The headlining act will play a few songs to make sure each performer can still hear themselves when everyone is playing at once. This also gives the front of house engineer an opportunity to dial in a rough mix for the night.

During sound check, the front of house engineer will be adjusting levels and applying basic EQ, compression and gating to each channel. They’ll also set up any time-based effects and outboard processors needed for the night.

Once everyone is happy with the way things sound, the entire process is repeated for the next band. The production crew helps the direct support set up their equipment in front of the headliner’s gear. Depending on the show, they may reuse the mics from the headlining act, or set up a whole new batch of mics.

This process is repeated until all of the bands are set up, and the opening act has had a line check. Then, it’s time to open the doors! Just remember — everything sounds completely different when the venue is full versus when it’s empty, so the first few songs will be spent adjusting for those changes. There’s usually a 10-30 minute change over in between each performance to reset the stage and make adjustments as needed.

And that’s only a fraction of the work that goes into putting on a good concert. Henry Rollins has a great quote on the subject;

"Listen to the stage manager and get on stage when they tell you to. No one has time for your rock star bullsh*t. None of the techs backstage care if you’re David Bowie or the milkman.

When you act like a jerk, they are completely unimpressed with the infantile display that you might think comes with your dubious status.

They were there hours before you building the stage, and they will be there hours after you leave tearing it down. They should get your salary, and you should get theirs."

Check back soon for more posts about what goes on at the Front of House and Monitor Mix positions!

If you have questions about the art of sound check or your venue's set-up, contact our Live Sound expert Paul Johnson via email or by phone at 248.591.9276 x175.

Categories: Live Sound & How To
Posted By: Brad Pack