How To Get Gritty Rock Vocals Like Metallica And Foo Fighters 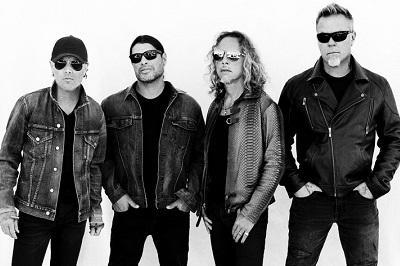 When you think of hard rock music, you probably think of roaring guitars and thunderous drums, but one of the most important parts of any song is the vocal. Think of what Metallica would sound like without James Hetfield's signature, growling "YEAH!" beckoning you to bang your head. It just wouldn't be the same.

The key to getting a gritty, in-your-face vocal tones like Metallica, Foo Fighters and Red Hot Chili Peppers all starts with finding the right mic. Read on to learn about some of the gear used by these rock heroes and work on bringing powerful vocals to your next session.

As always, no single mic will be perfect for every vocalist. Try as many different mics as you can until you find the one that best compliments the vocalist and the song. While large diaphragm condensers are a popular choice for tracking vocals, dynamic mics are common when it comes to rock. Their high-SPL capabilities and pronounced midrange make them perfect for capturing the aggressiveness of rock vocals.

One of the most common dynamic mics used to record rock vocals is the Shure SM7B. The SM7 was originally introduced in 1976 as the successor to the SM5B, which was a dynamic boom mic designed for broadcasting. By the early 1980s, studio engineers had discovered the mic and began using it as a “secret weapon.” In 1982, Quincy Jones used it to record Michael Jackson’s vocals on Thriller, and the microphone wasn't a secret anymore.

In the years since, the SM7B has become a favorite in the rock world for its powerful low-end and pronounced midrange. It’s been used by artists like Green Day, The Red Hot Chili Peppers and Metallica. The SM7B has an acoustical input of 84 dB SPL, so it can handle incredibly loud signals without overloading, which makes it perfect for recording screaming vocals.

For softer vocal passages, you may need a little extra gain to get your vocal to a manageable level. That’s where the Cloudlifter CL-1 comes in. The Cloudlifter CL-1 Mic Activator from Cloud Microphones is a phantom-powered input device that adds up to +25 db of ultra-clean, transparent gain.

Similar to the Shure SM7B, the Electro-Voice RE20 is a dynamic vocal mic originally intended for broadcast use that found its way into the recording studio. It has a pronounced low-end and minimal proximity effect, which makes it great for vocalists who move around while recording.

Traditional handheld mics are common too, like the Sennheiser e935, or even a Shure SM57 or SM58. Brandon Flowers of The Killers prefers the “live feel” of the SM58.

If you’re missing the high-end detail from condenser mics, try the Sennheiser MD 441-U, which combines the range of a dynamic mic with the frequency response of a condenser. The low and high equalization switches allow you to dial in the perfect tone for any vocal.

"Even when he shouts, there's a very distinct tone to his voice, and having used that mic before on quite a few singers, I knew it would be perfect for capturing that tone. The 201 combines the best of a large diaphragm and the best of a dynamic, and it was perfect for his voice.”

Finally, if you just can’t help yourself from using a proper condenser mic for vocals, go for a vintage tube mic like the Neumann U47 or Telefunken ELA M 251, which were both used on the most recent Green Day album.

Preamps
The signal chain for rock vocals is all about subtle distortion from driving the preamp and generous compression. For a thick, rich vocal sound with plenty of harmonics and a classic rock vibe, try one of the many iterations of the Neve 1073 preamp. The original model is a studio classic, but BAE offers surprisingly accurate recreations. Last but not least, the Rupert Neve Designs Portico 511 is a great alternative with a significantly lower price tag.

If you’re looking for something like the 1073 but with its own unique color, try the Shadow Hills Mono Gama. The Gama is based on the Golden Age Project Pre 73 design, which of course is based on the original Neve model. So, it’s kind of a 1073 twice removed.

For a cleaner sound with a punchy mid-range, check out the API 512C. API preamps have been used on countless rock records from Fleetwood Mac to the Smashing Pumpkins. Butch Vig and James Brown (no, not that James Brown) used an API console to record the Foo Fighters’ Wasting Light album. They described API preamps as "open and musical,” and "great for rock."

Compression
When it comes to compression, the classic rock vocal combo is an 1176 into an LA-2A. Using two compressors in serial allows you to achieve more overall compression without pushing a single compressor so hard it causes unwanted distortion.

You can technically achieve this with any set of compressors, but the key is that each successive compressor works less than the compressor before it. For instance, the first compressor in the chain typically controls transient peaks, which the 1176 excels at. Use fast attack and release times and high ratios like 8:1, 12:1, or even 20:1. The compressor shouldn’t be working all the time, as you should only see 3-6dB of gain reduction during the loudest parts of the track.

The next compressor in the chain is used to subtly and consistently “squeeze” or “fatten up” the vocal. This calls for a slower, more gentle compressor, which is why a tube-based optical compressor like the LA-2A is perfect.

If you’re looking to make some room in the budget, the Empirical Labs Distressor has been designed to emulate both the 1176 and LA-2A and sounds excellent on modern rock vocals. Similarly, the UK Sound 1173 is a modern unit designed to emulate the Neve 1073 preamp and Universal Audio 1176 in a single box.

Remember, rock music isn’t about recording with the top-of-the-line gear, it's about attitude. It doesn’t have to be expensive to sound good. Ian MacGregor likes using dbx compressors on vocals because of their edgy vibe.

Vintage tube mics are great but they may not get you the sound you’re going for when it comes to capturing rock vocals. Don’t be afraid to experiment and try something you wouldn’t normally do. Nobody ever did anything interesting in rock 'n' roll by following the rules all the time, anyway.

Have a question about achieving the sounds of your favorite artist? Please feel free to contact our team of Audio Consultants via email or by phone at 888.653.1184. We may even use your question in an upcoming blog!