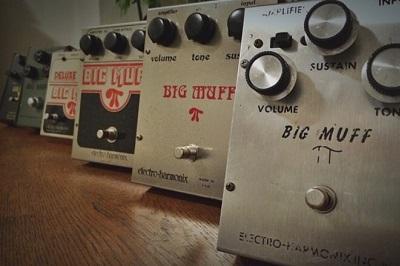 The Big Muff's lasting impact is also easy to see in the sheer number of clones, imports, color schemes and different variants that have been released over the years. Electro-Harmonix has gone back and is reissuing many of their classics in smaller sizes, including the recent release of the Op Amp Big Muff. One thing's for sure, while not all Big Muffs were created equal, they are all special in their own little way.

In preparation for Pi Day on March 14th, we're taking a look at five of our favorite Big Muff pedals. Read on to learn about the instantly recognizable, mid-scooped, tidal wave of saturation that these pedals can bring to your board and what makes them unique in their own right.

As stated above, there is no exact, singular tone for these early Muffs as they were using whatever parts were available, but my particular 1975 Rams Head is the one pedal I will never part with. It still features a massively scooped mid tone but the highs never get shrill and the lows are just monstrous.

The beautiful thing about the Ram’s Head is its iconic list of notable users. David Gilmour, who is responsible for the pedal's consistent $800 price tag, gets some of the smoothest, creamiest tone from it. Then there is J. Mascis, another crazy Ram’s Head collector, who is known for having a very cutting, wall of sound. Even with a pedal so distinctive in tone, it goes to show how unique it can sound in certain players' setups.

Electro-Harmonix Green Russian (2017 - Current)
This was a pedal you couldn’t give away in the 1990s and now thanks to players like Dan Auerbach of The Black Keys, certain versions (the Tall Font in particular) are now fetching upwards of $300 on the used market.

You really can’t mention one of these without someone saying, “Oh yeah, the one made out of old military tank parts.” Well, close but no cigar. After Mike Matthews went bankrupt, he started up New Sensor and Sovtek in the mid-1980s to sell ICs and vacuum tubes. In the midst of his newfound success, vintage EHX pedals were skyrocketing on the used market and eventually it was agreed upon to bring back the Big Muff, completely manufactured in Russia.

There are many variants but overall, the Russian Muffs have a fatter low end, more presence and a bit less gain on tap. They've become extremely popular within the bass community. Just last year, EHX finally stepped up to the plate to make a reissue of the army green classic, which gained an overwhelmingly positive response from the pedal community.

Electro-Harmonix Deluxe Bass Big Muff (2014 - Current)
Bass players love the Muff just as much as anyone else. This is a full-featured bass specific fuzz with a DI out, a foot-switchable crossover, a gate and most importantly, a blend control. I’ve seen it a thousand times at a show where the bass player goes to step on a fuzz pedal and while it gets gritty, all the low end drops out of the mix. Not the case with this pedal. The blend is your friend!

Electro-Harmonix NYC Big Muff V9 (2000 - Current)
After EHX’s slow resurgence in the 1990s, there was a demand for a standard Big Muff reissue. After much R+D, Fran Blanche (of Frantone) modified the original circuit designed by Bob Myer and brought the Big Muff back to life in 2000. For a reasonable price, the OG mid-late 70s graphics and the classic sound are back and better than ever. It’s no wonder that the NYC Big Muff has become the brand's best selling pedal of all time.

EarthQuaker Devices Hoof (2010 - Current)
With the recent boutique pedal boom, there have been a lot of Big Muff-inspired releases. One of my favorites has to be the EarthQuaker Devices Hoof. This pedal strays from the standard silicon-only design and blends a hybrid of silicon and germanium. One of it’s more useful functions is its Shift control which gives you the power to leave your mids scooped or push em’ out to get above the band.