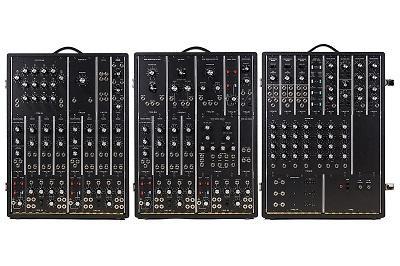 Synth fans everywhere are rejoicing as Moog Music has announced today that they will be creating a limited edition replica of the classic IIIp Synthesizer. With only 40 new IIIp units available worldwide, this is an extremely limited release. Vintage King has a small number of these synthesizers and we are starting to take pre-orders as of today.

What can you expect from the new IIIp reproduction? As with the other recent systems that Moog has recreated, the brand is dedicated to replicating the original down to the smallest details. Built based on original documentation, circuit board and art files, the IIIp will feature 37 hand-built modules, including 10 901-Series oscillators, the 905 Spring Reverb and the 984 Matrix Mixer.

The history of the Moog IIIp is a storied one. Dr. Robert Moog, the beloved genius behind the namesake brand, began working with hundreds of musicians in the 1960s to develop a method of expanding electronic music. The idea was to push beyond the basic sound generators that had previously been created using old radio and recording studio equipment.

After years of research, the results of Bob's efforts led to him to start building individual models and custom modular systems. As orders grew in numbers, Bob began assembling a team of ten techs who would help him handbuild these early synthesizers in his New York-based storefront space.

While the original three synthesizers (Synthesizer I, II and III), were built into large cabinets meant for use in studios, the IIIp was designed to be more mobile. Bob would take the formula of the previously released IIIc pre-configured synth and put into a portable 3-cabinet unit that would make up the IIIp.

Moog synthesizers are world renowned for having ushered in a new era in the sonic exploration of music, thanks in part to users like Wendy Carlos, Isao Tomita, Kraftwerk, Gary Numan and beyond. Perhaps the best use of the IIIp synthesizer would be in The Beatles' "Here Comes The Sun," as George Harrison and Manfred Mann's Mike Vickers programmed a piece of synth magic for one of the pop world's most beloved songs.

If you're interested in pre-ordering the Moog Music IIIp synthesizer, please contact one of our Audio Consultants via email or by phone at 888.653.1184.