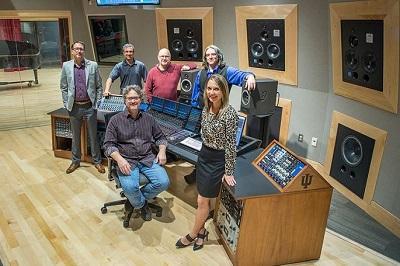 As one of the first major universities in the country to have an audio program, Indiana University’s Jacobs School of Music has a time-tested dedication to offering the best education in engineering and production.

“It started with an internship/mentoring model, and the idea was for it to be as hands-on as possible,” says Jacobs' Assistant Professor of Music Michael Stucker. “From the start of your very first semester, you’re doing a high-quality recording session every week."

When the school was recently gifted a generous donation, the staff reached out to Vintage King for help in outfitting a new state-of-the-art recording facility. We caught up with Michael Stucker and talked to him about working with Vintage King's Chris Bolitho to bring an Avid S6 control surface and ATC monitors to the studio space.

The new studio is a very impressive space with a large live room and three iso-booths. Can you tell us a little more about how that space was designed?

We had been thinking about this space for five or six years and trying to figure out what we wanted. Basically, our starting point was here’s what we need, here’s what we have... Now, how do we make it happen?

We started working with an acoustician from BAi out of Austin. We started with the direction of the control room. We made sketches of every possible configuration trying to figure out the most useful layout. We narrowed it down to two sketches that we liked and had the architects start drawing up the plans.

This studio needed to cover a lot of ground, in terms of the genres being produced at the school and the methods used for each. How did you account for that during the construction of the space?
The construction process was the hardest part. We knew that we had to be able to accommodate a wide range of music. We also had six full-time faculty members, who are all engineers themselves, all from different backgrounds, with their own opinions on how it should be done.

We have a very large classical music school, so we knew it had to be outfitted for that. The donation actually came from a foundation that was created for a student who attended and graduated as a voice major [Georgina Joshi]. Her parents made the foundation after she passed. The donation was largely because she said, “This place is amazing, but they don’t have anywhere to record demos.”

We had a rock studio. We had rehearsal spaces and performance spaces for classical music, but no proper studio. So these facilities are just as much for music majors as the audio majors.

At Jacobs, the studio also doubles as a classroom. Were any special considerations made to keep the facilities student-friendly?
At the end of the day, the studio is set up more for students than for engineers. The rack gear goes all the way down the floor, which is great for visibility when we have students in the back, but not-so-great for engineering ergonomics.

In addition, when designing the layout of the room, we wanted a really large sweet spot to accommodate students in the back.

How was Vintage King's Chris Bolitho involved with helping you design and build the studio?
We started talking to Vintage King fairy early in the process. Chris helped us look at all of our equipment options. If a faculty member were building their own place, that would be different, but we needed foundational equipment that the students were likely to see in the field.

Chris was also very helpful in finding us newer, less expensive gear that sounds great and actually fits in a student's price range. The console was by far the biggest struggle through. Vintage King helped us set up meetings at AES to try out a bunch of different ones.

You made the decision to build a hybrid studio. What made you go with a control surface over an analog console?
The whole faculty grew up on analog consoles. We started the process thinking we would get an analog desk. Most of our meetings at AES were for analog desks, but we kind of struggled trying to figure out what students were likely to use for the next 10-15 years. What desk makes sense for us to teach on? We have an Audient console in one of our other studios, so we made the choice to go hybrid. After that, we tried out a few options and eventually landed on the Avid S6.

What made you choose an Avid S6 specifically?
Mostly because its workflow offered a wider range of options for students. We actually did a shootout between the S6 and the Slate Raven. Since we do a lot of large sessions like jazz and orchestral stuff, we have tie lines to orchestral-sized rehearsal rooms in the other building. That means we’re dealing with a large number of musicians, mics, and channels. The Avid S6 provided the most preamp options in one area.

How do you go about teaching students on the S6? What’s your workflow like?
All of the students in the program have laptops, so getting them on the S6 is more about teaching them the difference between mousing a fader and actually touching a fader. You’re much more tied to the music when you grab a fader and listen, instead of looking at a screen.

It’s less about workflow and more about getting them to feel like they’re a part of the music. Also, musicians perceive what you’re doing differently when they see you moving faders. Workflow is all about how quick you can be. Shortcut keys and Spill on the S6 make everything quicker, more fluid. You’re more a part of the session and less getting in the way of it.

Let's shift gears and talk about the monitors. What made you choose the ATC monitors for this recording studio?
Honestly, once we knew we could afford that level of monitor, we just listened to what was available and they were the best. All of the monitors were great, just different. We just liked the ATCs the best.

And you have a 7.1 surround system installed too, right? Can you tell us about that?
We knew we wanted surround from the start. We have three other HD systems that are all 5.1 systems. The students do a lot of film scoring, so we knew we would need them. We were thinking about it at the very start of the acoustic design of the control room.

How is your control room set up? What kind of outboard gear do you have in there?
The idea was to select gear that will allow students to understand as many other pieces of gear as possible. A lot of foundational gear like Neve 1073s, Teletronix LA-2As, Urei 1176s, stuff from API. So much out there is based on some version of that, so we wanted to make sure we had all of the foundational pieces there.

What’s a typical day at Joshi Studios like?
Juniors and seniors have time to independently work on class projects recording whatever genres they want, including pop, rock, jazz, classical. Thursday nights and Sunday mornings are reserved for performance majors to record audition tapes. We also record a full video for those sessions. Classes meet a couple times a week to utilize the listening environment, but other than that it’s available for students to sign out. The studio is full all the time.

If you're interested in learning more about how Vintage King's EDU Department can help your school or institute, please reach out to our team via email or by phone at 818.237.9181.