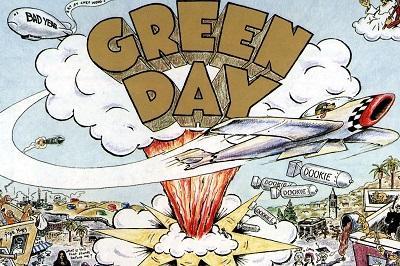 Earlier this month, Green Day's Dookie turned 24-years-old, but it's youthful exuberance and pop prowess still seems fresh all these years later. Read on to get insight into how three Berkeley punks were able to create a modern punk masterpiece in the era of grunge domination.

Growing Up, Burning Out

Green Day formed in 1986, but it wasn’t until 1994 that they would finally see their “overnight” success. Their second studio album, Kerplunk, was released in 1991, and sold 10,000 copies on its first day.

Green Day were onto something. They had captured the disgruntled, apathetic voice of Generation X, and they had the attention of every label in town. Geffen. Columbia. In true punk rock fashion, they turned every one of them down. Even when they invited the band to Disneyland. After all, Green Day were already signed to the indie label Lookout! Records.

That is until a junior A&R rep from Reprise records named Rob Cavallo called. Rob had recently produced the self-titled debut record from California punk band The Muffs in 1993, which Green Day were big fans of. The band invited Rob down to their practice space in Berkeley, where they got stoned and jammed for about an hour.

Eventually, Rob was able to convince them to sign to Reprise records for their major label debut. This didn’t sit well with the punk community. Green Day were labeled as sellouts, and banned from their original stomping grounds — a punk co-op called 924 Gilman.

Billie Joe Armstrong: “I couldn’t go back to the punk scene, whether we were the biggest success in the world, or the biggest failure. The only thing I could do was get on my bike and go forward."

Do You Have The Time To Listen To Me Whine?
Dookie was recorded in Studio A at Fantasy Studios in Berkeley, California in only three weeks. Green Day were well rehearsed from performing the songs on their last tour, so they were able to knock out basic tracks for each song in only three or four takes.

The band set up in the live room with Tre’s drums in the center, baffled off with gobos. Mike Dirnt and Billie Joe played their instruments in the same room, but their amps were isolated in separate booths.

All of the tracks were recorded to Studer A800 machines with two‑inch tape at 15ips. According to recording engineer Neil King, the drums were recorded with the following set up:

After the drums were tracked and comped together (on tape, meaning King spent hours chopping and splicing), Dirnt played a rented Fender P Bass through an Ampeg rig, which was recorded using a DI box, a Neumann FET 47 and “a little 84 spot mic." Once the rhythm section was recorded, King bounced basic tracks to a 24 track reel. They set up camp in Studio B to track vocals and guitar overdubs using a Trident 80B.

Billie Joe used his iconic Mexican Fernandez Strat (tuned down a half-step, of course) to play the rhythm parts from the control room. There was a Marshall cabinet set up in the live room, with a Shure SM57 and a Sennheiser 421 a few inches from the cones, and a Neumann U87 about 15 feet back.

Vocals were recorded with a Beyer 201. In an interview with SOS, King said “the 201 combines the best of a large diaphragm and the best of a dynamic, and it was perfect for his voice."

Pulling Teeth
After 10 days of tracking in Studio A and a few days of overdubs in Studio B, King packed up once again and set up camp in Studio D, where he spent a couple weeks mixing on their Solid State Logic console.

King said the band insisted the album use no reverb. "I used that gear as much as I could, but as soon as the guys heard anything or saw any lights working it would be, 'Oh, no reverb! All dry.’” According to Billie Joe, the band wanted a sound similar to the Sex Pistols or the first Black Sabbath albums.

Unfortunately, the mixes didn’t turn out well. King said, “When I mixed the record everything had to be dry, with that really lo‑fi punk sound, and to be honest the whole thing sounded lifeless... [The band] were of the ethos that punk records had to be bone dry, and after I mixed it they must have been persuaded by Warner Brothers [the parent company of Reprise] that it had to sound a little sweeter to get radio airplay.”

So, Green Day packed up once again, and headed south to LA to have the legendary Jerry Finn remix the album.

Take Me Away To Paradise
Dookie was released on February 1, 1994. It charted in seven countries and hit number two on the Billboard charts in the US.

Singles like "Longview," "When I Come Around," "Basket Case," a re-recorded version of "Welcome to Paradise" and “She” propelled the band to international superstardom, and paved the way for the punk resurgence of the 90s.

The album even earned them a set at Woodstock ’94, where Billie Joe infamously started a mud fight with the audience. Pandemonium ensued. Fans rushed the stage. Mike Dirnt got tackled by a security guard and knocked one of his teeth out. Just another day at the office for Green Day.

The following year, Dookie won a Grammy Award for Best Alternative Music Album. It went on to earn spots on countless “best of" lists, and was eventually certified Diamond. To date, Dookie has sold over 20 million copies worldwide, and is still the band’s best selling album of all-time.

Not bad for a couple of stoner punks from Berkeley, huh?