The World of Sending Audio Over IP 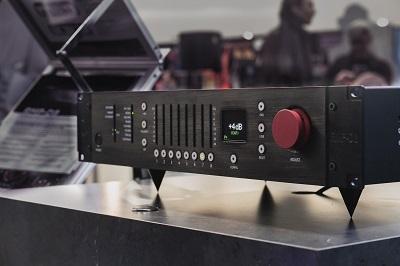 With the announcement of more SoundGrid and Dante-enabled gear at NAMM 2018, including the Rupert Neve Designs RMP-D8 and Apogee Symphony, the world of sending audio over IP has blown wide open.

The push towards sending audio over IP has been around as long as road crews and sound engineers have been carrying cables for every single input and output in their rigs. How does this technology help deliver pristine sound and save on chiropractor bills? Continue reading to learn about the many benefits of sending audio over IP.

How Do AoIP Systems Work?

Without getting too deep into the IT world, there are three types of AoIP systems, each of which operates within different layers of a computer network. These layers are used to identify where a signal is within a network and how a device accesses that signal.

It should also be noted that Layer 3 systems can connect directly to existing ethernet ports in your computer, while Layer 2 systems will require an external interface. If that sounds too nerdy for you, don’t worry, most AoIP systems are plug-and-play!

AoIP Systems
AoIP may seem like a modern development, but it’s actually been around since the 1990s. Today, over a dozen companies have their own protocol for AoIP. Many companies license their tech to hardware companies, while others have created “open” protocols that are available free of charge.

Here’s a quick breakdown of the most popular systems:

AES67: The AoIP Standard
In 2013, the Audio Engineering Society (AES) created an open standard for audio over IP/ethernet interoperability known as AES67. Interoperability is the key word in that sentence. By publishing an open standard, AES hopes to solve the issue that plagues so many other areas of the audio industry — when two pieces of gear won’t “talk to each other.”

AES67 is a set of guidelines for existing and future systems to follow in order to be compatible with one another. It sets a minimum standard for AoIP devices to follow. By following AES standards, your device will be compatible with other AES devices. That’s interoperability — the ability to operate within a computer network.

Which System Is Right for You?
With so many competing systems to choose from, it can be hard to determine which unit is best for you.

First, try to narrow down why you need an AoIP system. If it’s simply to replace long cable runs for standard inputs and output, a Layer 1 system should do the trick. If you need to connect multiple units within a network, browse for a Layer 2 system. And if you need the ability to switch between networks, go with a Layer 3 system.

Focusrite RedNet
Leveraging the flexibility of Dante, Focusrite's audio-over-IP devices deliver a modular approach to building up your audio solution, whether for post-production, broadcast, live sound or the recording studio.

Focusrite’s RedNet is the first to offer IP network audio interfaces for the recording studio – or any application that requires moving high-quality audio around with ultra-low latency, and is currently the popular AoIP interface on the market.

Avid MTRX
The Avid MTRX was introduced in late 2016 and has since become a must-have, as this powerful interface offers flexible routing with Avid control surfaces, Eucon controlled monitor functionality and a massive integrated router. The Dante module for the MTRX gives users 64 channels of digital I/O to use in their post-production facility or recording studio.

Their 112D unit is equipped with a 48-channel digital mixer designed just like a large format mixing console. The 48 inputs can take signal from anywhere including the physical inputs on the interface itself, audio channels from host software on your computer, audio network streams or even mixer outputs.

The Symphony I/O MKII SoundGrid is a multi-channel audio interface featuring Apogee’s newest flagship AD/DA conversion, modular I/O with up to 32 inputs and outputs, and direct connectivity to the Waves SoundGrid® network.

Choose from four base configurations:

You can easily expand as your studio grows, with two module slots and the capacity for up to 32 inputs and outputs of A/D & D/A conversion per unit.

Connect the Symphony I/O Mk II to your computer via Ethernet cable to sync audio between multiple computers, DAWs and rooms. You can also connect to a Waves SoundGrid server for near-zero latency recording with any SoundGrid compatible plugins.

Rupert Neve Designs RMP-D8
Even Rupert Neve, the master of all things analog, has started to bring AoIP technology into his products. The brand new RMP-D8 puts the beautiful punch of Rupert's classic preamps into an interface integrated with Dante that can be used in the live setting, post-production facilities or recording studios.

Burl Audio BMB4
Burl Audio's new BMB4 module extends these connectivity capabilities to the Waves SoundGrid platform for both the B16 Mothership and the B80 Mothership. With 64 I/O channels of Waves SoundGrid connectivity, the BMB4 truly opens up a wide range of options for your workflow, no matter which type of studio or live setting you're working in.

While AoIP systems are currently more commonly seen in large or high-end facilities, as the technology becomes more accepted, many industry experts expect to see them introduced to small-scale facilities and even home studios in the not-so-distant-future.

This could allow engineers to set up areas to record in various rooms around the house — a walk-in closet for the vocal booth, the bathroom for a reverb chamber, and the hardwood floors in the dining room would be perfect for tracking drums!

Although AoIP has a been around for decades, it’s finally starting to become integrated into the studio world. Systems are becoming more advanced and less expensive every day. When will you make the switch?

If you're interested in learning more about AoIP or which system would best fit your needs, contact one of our Audio Consultants via email or by phone at 888.653.1184.


Products in this Article
Categories: Vintage King Studio Services & How To
Posted By: Brad Pack