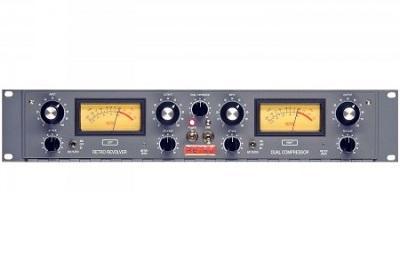 It's only Tuesday of NAMM week and new gear is being announced left and right. We're extremely excited about the brand new piece from Retro Instruments Inc. called the Revolver. This release from the brand who gave us classics like the 176, Sta-Level and Doublewide, is a dual-channel tube compressor inspired by the British Invasion.

The Revolver began as an experiment over seven years ago, as Retro built several units and began testing them in different studios. Designers took inspiration from the much-beloved British mod of the Altec 436, the classic compressor that was made famous by its use during sessions with The Beatles.

In addition to recreating the classic Altec 436 unit, Retro has added some features that will make the rackmount unit easier to use in the modern day studio. The Revolver includes stereo linking, side-chain filter and continuously variable threshold, attack and release.

With engineers and producers like Vance Powell, Matt Linesch and Don Setaro already claiming their love for the Revolver, we're sure that many more devotees are to come. For $2,995.00, you'll soon be able to make it a part of your own studio and bring home the power of a revived 436 compressor.

If you're interested in pre-ordering, please visit our Retro Instruments Inc. Revolver page or reach out to one of our Audio Consultants via email or by phone at 888.653.1184.