Your Time Is Gonna Come: The Making of Led Zeppelin's Debut 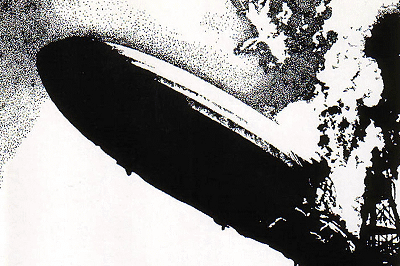 Last week on the Vintage King blog, we took a deep dive into the drums sounds on Led Zeppelin's "When the Levee Breaks." We're discussing Zeppelin once again, but this time we are covering the history behind the recording and release of their self-titled debut from January 1969.

Led Zeppelin are widely regarded as one of the most influential bands of all time. They shifted the playing field of the music business, pulling sales away from traditional radio singles and drawing listeners to album-oriented rock.

They were one of the first bands to hold sold-out concerts in stadiums, dawning the era of arena rock. They’re credited as being the forefathers of metal, and have additionally influenced the shape of rock and pop for years to come. And it all began with their first record — the eponymous Led Zeppelin.

Steve Erlewine: “Led Zeppelin I was a significant turning point in the evolution of hard rock and heavy metal."

Led Zeppelin was formed out of desperation. In 1968, Jimmy Page was playing as the lead guitarist in the infamous Yardbirds, when the rest of the band decided to quit. As the only remaining member, Page was on the hook to fulfill the band's contractual obligations for a European tour.

Instead of defaulting on the tour dates, he hired bassist John Paul Jones, vocalist Robert Plant and drummer John Bonham to perform with him as "The New Yardbirds.” This gave the band an opportunity to develop, arrange and perform new songs, like "Communication Breakdown," "I Can't Quit You Baby," "You Shook Me," "Babe I'm Gonna Leave You" and "How Many More Times”.

By the end of the summer, the band returned to England and were ready to record their debut album. Within a month, Page changed the name of the band to Led Zeppelin, and booked some time at the infamous Olympic Studios in London.

Olympic Studios
Recording for Led Zeppelin at Olympic Studios began in October of 1968. Between September 20th and October 10th, the band was able to record and mix their entire debut album in less than 36 hours. Page produced the record himself, and enlisted longtime friend Glyn Johns to engineer.

Page later explained their surprisingly short stay in the studio in an interview with Uncut magazine: "[Led Zeppelin was] a live album, and it's done intentionally in that way. It's got overdubs on it, but the original tracks are live.”

To ensure that there would be no outside influence on the creative direction of the record, the band decided to hold off on pursuing a label deal, and self-funded the album with the assistance of their manager Peter Grant.

Page discussed the decision in an interview with Guitar World magazine: "I wanted artistic control in a vise grip, because I knew exactly what I wanted to do with these fellows. In fact, I financed and completely recorded the first album before going to Atlantic."

Get The Led Out
When it came time to record, the band was well-rehearsed, Page knew exactly what he was looking for, and Johns knew exactly how to capture it.

While Page is generally known for playing a Gibson Les Paul Standard, on Led Zeppelin I, he played a 1959 Fender Telecaster through a Supro Thunderbolt (Supro makes a modern version of Page's amp called the Black Magick). The Tele was a gift from his former Yardbirds bandmate, Jeff Beck. It started off with a blond finish, but Page stripped the paint and gave it the psychedelic treatment with some fluorescent paint. Page named it "The Dragon."

In a 1998 interview with Guitar World, Page said: “I still have it, but it’s a tragic story. I went on tour with the ’59 Les Paul that I bought from Joe Walsh, and when I got back, a friend of mine had kindly painted over my paint job… His paint job totally screwed up the sound and the wiring, so only the neck pickup worked. I salvaged the neck and put it on my brown Tele string bender that I used in The Firm.”

According to a 1977 interview with Jimmy Page published by Modern Guitars, he used a Gibson J-200 (borrowed from Big Jim Sullivan) for the album's acoustic tracks, and an "out-of-tune" 10-string Fender 800 pedal steel guitar on "Your Time Is Gonna Come."

On "You Shook Me," Page used a Gibson Flying V. Page said: “With those big humbuckers, it was so powerful you can hear it breaking up the amp in the middle of the song. I could’ve tidied it up, but I really liked hearing the amp really struggle to get that sound out. It’s fighting through the electronics to get out of that speaker. I’m not sure what happened to that guitar, it might’ve found its way to Keith Richards…"

At the time, guitars were usually recorded with the mics as close to the amp as possible to reduce the amount of bleed. But, Page and Johns understood that "distance makes depth,” so they blended the close mics in with ambient room mics to achieve their iconic tone. The noise bleed was just part of the magic.

Johns employed his infamous drum miking technique to craft Bonham’s legendary drum tone, though the mics were summed to a single channel to make room for a cowbell/hi-hat overdub.

Page said in 1977 about the recording: “I was into ambiance on the first album, I’ll tell you that. Hearing drums sounding like drums. And that’s all there is to it. If you close-miked them they sounded like cardboard boxes. Distance makes depth. If you take the mics up, you get more of the sound.”

The Album Release
Because the band was so well rehearsed from their time on tour, the recording sessions went quite smoothly. After roughly three weeks, the band had finished tracking, overdubbing and mixing their debut record.

The band scheduled a meeting with Atlantic Records, and that was that — the rest is history.

Jimmy Page: "It wasn't your typical story where you get an advance to make an album – we arrived at Atlantic with tapes in hand... Atlantic's reaction was very positive – I mean they signed us, didn't they?"

Led Zeppelin was released in the US on January 12, 1969. After only two weeks it cracked the top 10 on the Billboard 200 charts.

Although the album wasn’t well-received critically at first, it went on to sell more than eight million copies worldwide, and gross more than £3.5 million (almost 2,000 times what the album cost to produce!).

Led Zeppelin has gone on to be recognized as one of the greatest albums of all time. In 2004 it was inducted into the Grammy Hall of Fame, and Q Magazine put it on their list of “Music That Changed the World.”

This was only the beginning. Before they knew it, Zeppelin would be back on the road. After releasing their debut album in January 1969, they would go on four US tours, four European tours and write/record/release Led Zeppelin II before the end of the year.

So… what are you still doing on the internet? Shouldn’t you be practicing or something? Go be more like Led Zeppelin!