Anthony Gallo Makes The Move To A Neve 8026 Console 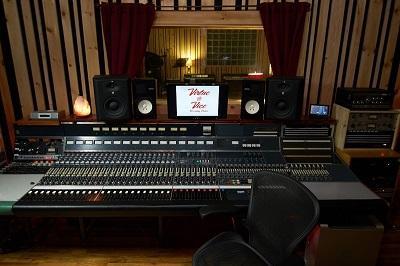 After moving to New York for a studio internship 15 years ago, Anthony “Rocky” Gallo began amassing engineering and production credits from an incredible list of artists including John Legend, Common, Carly Simon and Jon Bon Jovi. Throughout this major push in his career, Gallo began building out his own space, Virtue and Vice Studios, with a wide range of gear including a Neve console that he purchased from Vintage King.

“The first thing I purchased from Vintage King was that 53 series desk… I had gotten myself in front of them a few times before and just missed out on one, a few months prior to finding mine,” Gallo says. “I honestly called that day to buy a U47 but ended the call with a deposit on the board. It was a huge leap of faith at the time and I wasn't sure if I could pull it off financially. Luckily, it attracted more clients and I started booking even more projects because of it. It was one of the best decisions I've made by far.”

Recently, Gallo decided to make an upgrade to another Neve desk, this time opting for an 8026 console for Virtue and Vice. We sat down with the producer/engineer to talk about how the 8026 was fitting in, the process of brokering his 53 Series console through Vintage King and what’s next for him in his career after this sonic upgrade.

Let's talk about making the move from the Neve 5315 to the 8026. What made you decide to change the desk you were working on?

I definitely started using more of the groups in my workflow on the 53 series. Committing while tracking more often saved me time on the mixing side. Doubling the groups, having additional routing options, the compressors and monitor section sold me on it. All Class A doesn't hurt it either. The particular 5315 I had was incredible sounding. It was extremely thick and punchy.

My biggest fear was that the 80 series wasn't going to be better, but I fell in love the first day I was back up and working. The entire room was blown away by the vocal sound we got. I was doing the exact same thing as before just with the new channels and routing through the buss. Adding just a little reverb in the mix, and we had something really special. I do very little work on the mixing side now due to committing to the great sounds going in. It's saving time for clients in the end and delivering a better product.

How did you land on purchasing another Neve? What was it about this console that let you know it was right for your studio?
I wanted a console I'd have the rest of my career. An 80 series was always an unachievable dream, but working and saving since I bought the last desk is what made it possible. The footprint makes an immediate impression on clients. Clients still love walking into a control room and seeing a console that will be the centerpiece of their record making process. The entire band can sit right in front of the board with you while you're working. It's just like how I was used to making records with SSLs, but now with a much bigger sound. Everything simply sounds better going through it.

I've always felt that the studio needs to constantly reinvest into itself. Not for the sake of gear lust, but the fact that the majority of clients are funding this with their own hard earned money. It honestly feels like you're giving the same energy and fighting the same fight if you take that money to buy great equipment and try to make the next best record with it. With almost every box I have in here, I can pinpoint what record I worked on in order to buy it. It makes things very difficult to let go of.

What was the transition like in terms of working with Vintage King to sell your old console and bringing in the 8026?
Working with Vintage King is way too easy obviously [laughs]. There's a lot of care coming from the Vintage King end. The sale is completely transparent and you won't truly get that in a private sale. I appreciate it when I am told the bad things about a piece and then [I can] figure out how to fix them. Finding the bad when it's too late is the worst. There was a detailed list of things that needed to be done before I even sent a tech to go see it in person. Nothing unexpected came from either of the purchases so continuing the relationship only makes sense.

There are too many horror stories out there, so going any other way just didn't make sense. I make a living off making records solely, so extra money laying around to bail me out wasn't an option. Zero BS and a sure thing is what I hoped for with this console and Vintage King delivered. There was a great communication between the three parties, Vintage King, the previous owner and myself, which cut the amount of time to finalize the deal.

Vintage King gives everything the once over technically which made downtime practically zero. Any issues that came up, they were right on top of it. I did not have to make multiple emails or calls. One channel wasn't working quite right, and I figured I could get my tech to get his eyes on it, but [Vintage King Audio Consultant] Jeff [Leibovich] insisted Vintage King would take care of it before I could get any further. I've never had any company do that and follow through!

Talk about Jeff Leibovich’s role in helping you out with the studio.
Usually, he was hitting me up before I even got to ask the questions! I had no room for being down more than a week at the studio, so we had to align the arrival of the desk perfectly with no wasted time on either end. With every install, there will be some unknowns and things that come up last minute, but Jeff was one step ahead of the problems. We figured everything out before we had an issue. I was up and running faster than expected.

Now that you have the 8026 in the studio, what's next for you professionally and who are you looking forward to working with on this desk?
Hopefully, I’ll continue to work with a lot of the same type of clientele as I have before. I'm not looking to increase rates and lose out on the work that got me to this point. The idea is to offer an even bigger/better sound and offer that to the people who are looking to make great records - just like with the old console. I’d love to attract even more outside guys to cut basics and bring the project back to their studios to complete since those are always great days to sneak home and do laundry.

I'm still trying to bring bands to the next level of their career. That has become my new passion in the record making process. It never gets old seeing bands surpass the level of success they expected from their music career.