Music Documentaries To Watch Over The Holidays [2017 Edition] 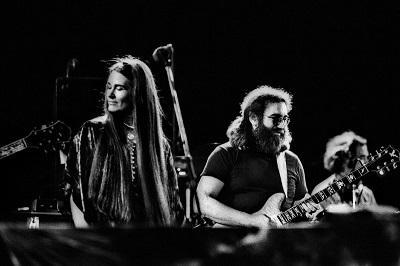 Let’s face it, you’d rather be doing something creative than spending hours with your extended family, struggling to make small talk. This year, give them (and you!) a gift they’ll actually appreciate — something entertaining to watch. A Christmas Story is great, but it’s not going to hold your Aunt’s attention long enough to keep her from asking you how “your little music stuff” is going. These are some of our favorite music and recording documentaries of 2017.

Long Strange Trip follows the Grateful Dead through the totality of their groovy journey, including quite a bit of psychedelics, love, freedom and a little bit of music. Actually, there’s quite a bit of footage of live Dead performances.

These live show "experiments" as the Dead saw them included a mantra of "We’re the same as you. You’re the same as us.” While this connection endeared them to their audiences, it also led to the self-destruction of Jerry Garcia, who couldn't keep up with the incredible fanaticism that would follow the band in the late 80s/early 90s.

One unique plus of Long Strange Trip features never before seen footage of the Dead constructing and performing with their enormous “Wall of Sound,” which was said to sound like "the voice of God." It truly is something that must be seen to be believed.

Gaga: Five Foot Two
This film goes behind the scenes with Lady Gaga during the production of her fifth album, Joanne. It gives fans a glimpse into the woman behind their idol — Stefani Joanne Germanotta.

Through a year-long journey of successes and failures, Gaga bares her soul in this vulnerable story. Featuring backstage interviews, in-studio footage, and moments from her personal life, Five Foot Two shows the human side of Lady Gaga as she struggles with fame, sexuality and being her own worst critic.

True Sadness was a marker of success for the band. It landed them two Grammy awards for Best Americana Album and Best Americana Roots Performance, as well as an induction to the North Carolina Music Hall of Fame.

Whitney: Can I Be Me
Whitney Houston had a historic career, full of highs and lows. Can I Be Me follows her journey from the beginning, when she started singing backup vocals for Chaka Khan, Lou Rawls and Jermaine Jackson. The film gives an emotional look at her struggles with fame, addiction, and love. It explores her history, including never-seen archive footage from Houston's 1999 World Tour, and interviews with her friends and family. But as quick as Whitney’s rise to fame was, her fall from grace may have been even more dramatic.

Hired Gun
We've spotlighted some of the classic studio backing groups in prior blogs, but Hired Gun sets its sights on specific players who have been instrumental in the evolution of modern pop music. With players like Liberty Devito (Billy Joel), Steve Lukather (Michael Jackson) and Justin Derrico (P!NK) involved in the film, we get an inside look at what its like to help support those in the spotlight.

Chavela
Chavela tells the story of Chavela Vargas, the Costa Rican singer renown for her Mexican rancheras. As a young girl, Chavela would sing on the streets for money, dressed as a man in a bright red poncho She was fond of chain smoking cigars, drinking like a sailor, and flashing her gun. Although she never lost her signature poncho, it wasn’t until her thirties that she became a professional songstress.

Chavela was a rebel who played by her own rules, and this documentary captures her essence perfectly. Featuring interviews with Chavela herself, fans are given a glimpse into the highs and lows of her career. From winning the Latin Grammy Lifetime Achievement Award, to her battle with alcoholism, Chavela is a touching look at the life and career of a true icon.

Rumble: The Indians Who Rocked the World
Rumble is a powerful documentary that explores the untold story of the Native American influence on music as we know it. Featuring interviews with Dan Auerbach, Taj Mahal and Iggy Pop, the documentary uses Link Wray’s "Rumble" as a launching point to highlight a number of influential Native American musicians, including Charley Patton, Mildred Bailey and Jimi Hendrix. The film aims to shine a light on indigenous artists, and their contributions. Robbie Robertson of The Band sums up the film best with a quote — "Be proud you’re an Indian, but be careful who you tell."