How To Get Inspired In The Studio 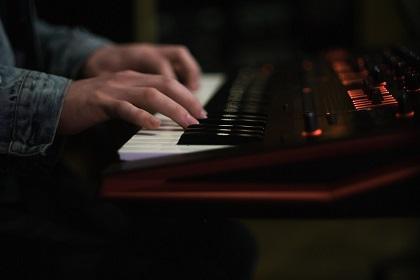 What happens when you finally have time to create and nothing comes? It's a hard thing to do when you've been able to relax and then need to find instant inspiration. What do you do? Two words: Brian Eno.

Brian Eno was a weird dude. He was a self-described "non-musician” that reinvented the recording process with a highly conceptual approach. His unique strategies changed the way we make music to this day.

In 1975, he published Oblique Strategies: Over One Hundred Worthwhile Dilemmas — a deck of cards with “oblique strategies” for creating music. Designed to help musicians overcome writer’s block, the cards offer challenges, limitations and abstract thought processes for the recording studio.

Here are some favorites from his collection of cards. Next time you find yourself stumped in the studio, try some of these tips and tricks to get your creative juices flowing again.

"Once the search has begun, something will be found.”

We’ve all been there. You sit down to write a song, spend two hours scrolling through presets. Only to walk away without creating anything. The key to finding something is knowing what you’re searching for. Don’t just sit down and hope that inspiration will strike. Bring an idea to the table. Try to get it out of your head and into your DAW. Don’t wait for inspiration — go after it with a club.

"Be less critical more often.”
Art is editing. The stories you hear of people writing timeless songs in 20 minutes are rare — even for superstars. Stop saying “no” all the time and just let the music happen. Humans are much better critics than creators. Lean into it! Create as much as you can. Identify what’s good, and what’s bad. Then, edit, edit, edit.

"Discover the recipes you are using and abandon them”
Humans are habitual creatures. We build routines and stick to them. While music traditionally benefits from repetition, approaching every song with the same cookie-cutter mentality can be poisonous to your creativity. Force yourself to find a new approach.

"Repetition is a form of change."
Part of breaking your bad habits is trying new things. So many musicians try to reinvent the wheel. Why write songs with needlessly complex chords, uncommon time signatures, and strange chord progressions? To impress other musicians? Plenty of hit songs have been recorded using three or four simple chords. So, pick a few of your favorites and get writing! Extra points for using the same chord progression the whole time.

"Go outside. Shut the door."
Nothing interesting ever happens inside of your comfort zone. Force yourself to create outside of the box even if you're mixing in the box. Leave the comfortable little cocoon you built and try something new. What’s important is that you shake things up and get outside of your usual space.

"Don't be afraid of things because they're easy to do.”
Every 16 bar musical phrase that could possibly be created has already been created. I’m not trying to be bleak or emo — it’s just statistics. But that’s relieving! It takes all of the pressure off. It’s ok to use the same chord progression as someone else. It’s ok to have a melody inspired by someone else — as long as you make it your own.*

*Author’s Note: Please don’t commit copyright infringement! And if you do, don’t blame it on us.

"Make an exhaustive list of everything you might do and do the last thing on the list."
This one’s pretty self-explanatory, but it’s a good tip nonetheless. The important part is that you actually write your ideas down. Not only do they serve as fuel for new ideas, you can come back to the others later.

"Decorate, decorate."
Eno probably meant this in musical terms. Like, "take what works in a track and write other parts that add to it.” Actually, that’s good advice too — you should write that down.

It’s just as important to take this quote literally, though. If your creative space isn’t conducive to creativity, what are you doing there? White walls and fluorescent lighting don’t give off great vibes. Buy some art! Get some colored LED lights! Put your guitars up on the wall. Do something to make your space inspire you.

Just do it! What’s the worst that could happen? If nothing else, it will force you out of your comfort zone for a little while.

"Do something sudden, destructive and unpredictable."
Some people say that creativity strikes like lightning. That explains why it’s so hard to capture. Don’t be afraid to get creative when the mood strikes. At work, on the commute home, in the shower — wherever. Bring a pen and paper to write down ideas. Use your phone to record voice memos. Don’t be afraid to get weird in public. You think that ever stopped Freddie Mercury.

"Go to an extreme, move back to a more comfortable place."
Don’t be afraid to push the boundaries. If you’re in a pop/rock band you may be afraid to explore harder songs. Maybe you’re a country artist afraid to explore hip-hop rhythms. Or an EDM producer thinking about incorporating some John Mayer vibes. Just do it. Nobody’s going to get hurt. You might find something you like. You can always dial it back later if it’s “too much.”

"Turn it upside down."
What would you do if you were absolutely positive that no one would ever hear this song? If you were totally free of any kind of judgement whatsoever? Let your freak flag fly! Do something weird! Pan all of the drums to the left. Record the vocal through a paper towel roll. Literally write a song upside down! Do something crazy and see what happens!

Hopefully, these tips will help throw gasoline on the fire that is your creativity. There are plenty more where this came from. Check out more Oblique Strategies from Brian Eno.