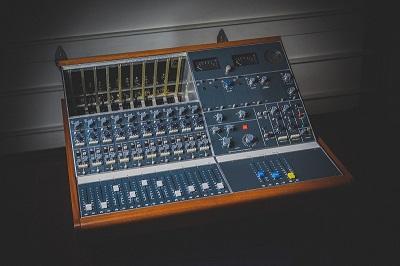 For the past few months, we've had the pleasure of watching our console team at the Vintage King Tech Shop breathe new life into a vintage Neve BCM10. This unique mixing console was released by Neve in 1970 and was primarily used for broadcast purposes at the time.

"The intent of the BCM10 was to have a simple device to run multiple microphones for a mono or stereo output," says Senior Console Tech Rich Hunt. "Nowadays, the BCM10 is used as a sidecar and for things like running stereo stems out of your interface and using it as a small summing mixer."

This Neve BCM10 was brought to us by a Vintage King client who was specifically looking for a premium servicing job from our team. Rich Hunt, along with fellow console techs Cedric Yee and Nick Wawsczyk, spent over 200 man hours working on the desk, including recapping modules, rebuilding original modules and upgrading the consoles woodwork.

"We really put the extra effort in on this one," Hunt states. "I think it paid off. It sounds fantastic and it looks fantastic."

Watch our new video below to get a behind-the-scenes look at how our console team brought this vintage Neve BCM10 back to its former glory. If you're interested in premium servicing for your own console, please reach out to one of our Audio Consultants via email or phone at 888.653.1184.