The Power of Burl Audio's Masterful B80 Mothership 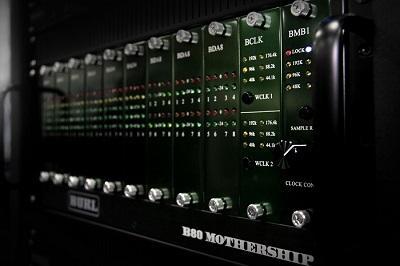 With all of the great converters out there, you might ask "Why Burl Audio?" Read on to learn more about these powerful tools and how they can revolution your studio's audio output.

Burl Audio is dedicated to making the best gear humanly possible, and has done just that with the B80 Mothership. This gear is built with the highest grade components available, as a fully loaded Mothership weighs over 60 lbs. Thanks in part to the custom transformer on every audio input and custom op amps on every output.

All of the card slots are designed to accept AD/DA, AES and MADI. This will allow you to integrate the Mothership into your pre-existing setup regardless of the connection types you’re already using.

You can choose between four different clock control settings, Internal, External, DAW and USB. One BNC Work Clock In and two BNC Work Clock Outs are also included so you can still use the high end external clocks you’ve been used to.

The Sound
Not only are Burl converters constructed to the highest standards, the sound quality is unlike anything you’ve ever heard. Each channel is coupled with a custom built transformer, and most of the time when we hear transformer we hear “color”, but that’s not the case with the Mothership.

Each channel has an all Class-A, all discrete design. The transformer on the channels audio input are very transparent if hit at a reasonable level to a point where no “color” is happening. When working on an intimate piece of music, I’ve found that the transparency of these converters has allowed me to capture a much cleaner and pure performance at a louder level with less noise. Vocals, strings, acoustic guitars, horns, drums, bass, etc, all sound so smooth and pristine.

At the studio I work out of, the 45 Factory, we’re typically using Shadow Hills GAMA preamps or Telefunken V76s, both of which can tend to naturally have a bit of color. On the Shadow Hills, you have the ability to switch between different output transformers to access a variety of tones, depending on what’s being recorded, the transformer can be switched to best match the Burl for the most natural recording possible. This has been the only setup that makes it feel as if I’m in the room with the performer while listening to playback.

The Burl isn’t always clean, the converter can be driven a bit to add some “color”. There’s a sweet spot on every converter that will open up the overall sound of the preamp. It doesn’t turn into oversaturated noise, but adds a little hair and subtle harmonic distortion to the signal that is pleasing in all the right ways.

The Headroom
One of the biggest things with Burl gear is the amount of headroom on the recordings. The Burl can get a fuller sound with less signal and far less noise. As I was mentioning earlier, the converters can be very transparent when hit with a reasonable level. This is great for things I want to be as smooth as possible, mostly vocals and acoustic instruments. But if I want to push something a little harder, the converters can accept the extra push from the preamp and have a way of adding a nice color without changing the sound completely or clipping the input.

When I was first working with the Burl, I was wondering if my audio levels were too low. Everything sounded great through the monitors, but I was recording lower signal than I was used to. I came to find out that the level was just right, but I was able to have more if I wanted to.

The first couple projects I tracked and mixed completely through the Burl B80 Mothership were some of the best sounding and easiest I’ve done. I was able to track everything with good level and full tones all the way across the board, then really push the tracks for a fuller and louder mix than I was getting before.

The Convenience of Studio Configuration
With only taking up four spaces in a rack, the Mothership can handle 80 channels of audio information, which can be customized to your studios needs. There are 10 slots available in the Mothership which can accept a variety of audio cards.

The BAD4 is the analog to digital converter that offers four channels of audio in through XLR connections. This is where the Burl can be very convenient if you’re only looking for a couple channels of high end conversion. If you’re just starting out and don’t need a large number of I/O to your DAW, but still looking for top quality conversion, you can choose to add only one or two cards and expand as your studio grows.

Burl's BDA8 is the digital to analog conversion card that offers eight channels of audio out through DB25 cables. Very convenient that you can add eight channels at a time, for most smaller studios that is all you’ll ever need, but if you choose to expand your setup, you can easily increase the number of I/O in the Mothership.

The Name
Now that Burl is becoming a staple in the audio industry, even clients are starting to hear about the magical qualities of the brand's converters. It used to be if you owned a 192 I/O or an HD I/O you were playing with the big dogs, and a lot of clients knew that if they saw those in your racks you were working with a high end pro audio program like Pro Tools.

Since we made the switch over to Burl, we’ve had countless calls from clients looking to come record through the Mothership. We’ve also had a handful of clients wanting to transfer old ADAT and tape recordings into Pro Tools through the Burl. The Burl name is now linked with quality, and musicians are looking to hear the magic for themselves.

Every client that has recorded through the Mothership has been over the moon with the results. It always seems to come up at some point in the session, “Man, everything sounds so good, have you been mixing as we go along?” and I reply, “I'm just using really good gear with really good converters”. By the time they leave, they are totally sold on the Burl.

Everyone’s taste is different when it comes to the sound of their music. Some people like it to be as clean and pure as possible, others like it to have some dirt, attitude and grit. The Mothership is one of the only converters that is a balance between the two worlds. A great pairing for an audio engineer that works on multiple genres of music.

If you're interested Burl gear or have questions about what B80 Mothership set-up would most benefit your studio, be sure to contact an Audio Consultant at Vintage King via email or phone at 888.472.9023.