Recreating The Sounds Of Stranger Things With Pedals 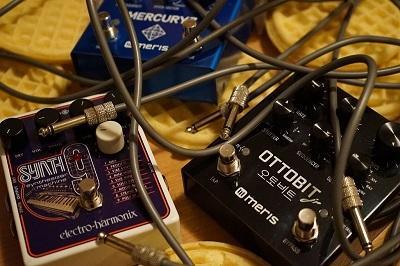 When Stranger Things debuted on Netflix in July 2016, the show's soundtrack single-handedly rekindled the public's love of spooky sounds created with vintage synthesizers. Scored by Kyle Dixon and Michael Stein of Austin-based band Survive, the duo predominantly used synths like the Arp Odyssey, Roland SH-101, Korg Mono/Poly to create the sounds of Hawkins and the Upside Down.

Instead of recreating the Stranger Things score with similar synthesizers, I had the idea to build it from scratch using some of my favorite guitar pedals. By using only a Meris Ottobit Jr., Meris Mercury7 and Electro-Harmonix Synth 9, I was able to get something extremely close to the sounds of Dixon and Stein's original theme.

Hear Dustin McLaughlin's version of the Stranger Things theme using the Meris Ottobit Jr., Meris Mercury7 and Electro-Harmonix Synth 9 below and continue reading to learn how these sounds were accomplished.

It’s the main sequence sped up and played on the high E string with an Em filter sweep underneath. Both achieved from the Meris Ottobit Jr. The tone is the String Synth from the Synth 9.

Main Sequence 1
I used the EHX Synth 9 on the Mood Bass setting to shape the tone and the Meris Ottobit Jr. to run the sequence.

This is an easy way to think about it:

Tap the tempo in relative to the song and pivot your expression pedal back and forth every four notes playing an open E and the beginning of the sequence.

Main Sequence 2
When things pick up around the 14-second mark, I use the Synth 9 on the Profit V setting and actually pick through the notes on top of the sequence. This adds an upper octave to make the main riff pop a little more.

Pads
This is the EHX Synth 9 using the OBX and String Synth settings and the Meris Mercury7 on Ultraplate.

Filter Sweeps And Other Sound Effects
The Meris Ottobit Jr. has one of the best filters on a pedal or synth I’ve ever heard. With certain chord swells, I would sweep through the filter using the expression pedal.

The rapid, jittery sound effects are the first half of the sequence sped up to 32x on the Sequencer Mult dial on the Ottobit, the Sample Rate at around 11 o’clock and then sweeping the filter with the expression pedal.

The Beat
I used a 909-inspired plugin in Logic Pro X with a low pass filter.