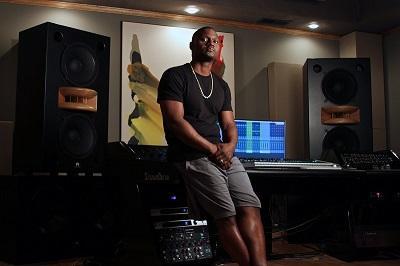 “They are huge and I love them,” says Needlz. “I mainly work with songwriters and other musicians and the main thing for me as a producer is trying to sell the music. I had some smaller speakers in here before and they sounded great, but you really couldn't feel them. What goes on in music these days, especially in Urban, and in Pop, too, is that you have to feel it. It’s more than just mids and highs, people really gravitate to that low end.”

"Needlz was on the hunt for speakers that can be seriously loud and sound great,” explained Jeff Leibovich. “Augspurger had been on the table for a while and we all worked together to get the right look, size and that sound that Needlz was searching for."

Needlz was born Khari Cain in Lansing, Michigan and began to DJ while an undergraduate at Florida State University. He majored in the graduate music business program at New York's prestigious NYU and pursued a career as an A&R executive. After an internship with Bad Boy Records, he begin his career in record production with artists like Bruno Mars, Drake, Lupe Fiasco, Jeezy, Lil Wayne, 50 Cent, Lonely Island, and many others.

Beyond the impact of powerful monitoring in his own studio, Needlz points out the need for accuracy when his work is heard elsewhere in a wide variety of listening environments. “At the end of the day, I want whatever leaves my studio to translate into other studios where the recording artists are listening. I want it to sound just like it sounds in my studio and it was really important that these Augspurgers are an industry standard. I want to make sure that the client is gonna feel it. Ultimately, where I make my money is in those studios when the A&Rs come by, as opposed to how it sounds on some iPad.”

Augspurger principal Dave Malekpour himself dropped by Needlz’ studio for a day and custom-tuned the monitors. “It made a huge difference to have Dave analyze the sound and work with my room,” Needlz explains. “Now it’s like having a Lamborghini. You're not driving 200 miles per hour everywhere you go, but it's just good to know you can.”

If you're interested in learning more about Augspurger monitors, our knowledgeable staff is available to talk at any time. Please feel free to contact us via email or by phone at 888.653.1184. To speak with Jeff Leibovich, please dial 888.653.1184 ext. 115.