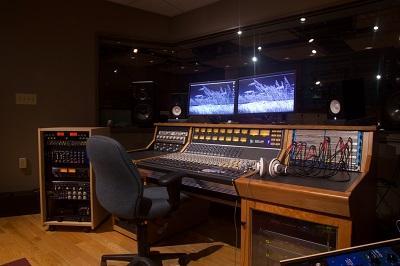 With a program centered on furthering forms of old-time music, including bluegrass, Celtic and country, East Tennessee State University has developed an enviable curriculum. Adding to the excitement of the program is the recent addition of an API 1608 console as the centerpiece of the school's recording studio.

"A few students may start our series of audio engineering classes with some knowledge of Pro Tools, Logic, or some other DAWs, but for the most part, they are blank slates," says ETSU Recording Lab Manager Benjamin Bateson. "The API 1608 gives them a good, manageable console on which to start learning signal flow through a console."

Working in tandem with Vintage King Audio Consultant Chris Bolitho, Bateson brought in the API 1608 during the summer of 2017 and students have now been working on the console for several months. We recently chatted with Bateson about what made him select the 1608 for his students, the role it will play in their education and how he teaches a mix of analog and digital in the studio.

What's the set-up of the studio at ETSU like?

We have a medium sized main tracking room, one smaller room for isolation purposes and a control room. All of which is acoustically isolated from the rest of the building. Most of the groups we record prefer to track live in one room so the lack of iso-rooms hasn’t been a major issue. We have enough moveable baffles to keep bleed to a minimum, if desired.

Since the recording studio is connected to ETSU’s Bluegrass, Old Time and Country music program we record quite a bit of acoustic music that doesn’t include a drum kit. The studio space seems to work well for those types of music but we also recording country and other genres where a drum kit is essential. We have plans to add some other recording facilities in the future as we expand our course offerings, but for now this is our only studio space.

The centerpiece of the studio is the API 1608 console. The console pres tend to be what we’ll use most of the time but we also have some outboard preamps that get regular use. The Grace Design m801 tends to be a student favorite. We also have an Aviom system as our cue setup. It has been a rock-solid part of our studio setup since the place was built and we’re very glad to have it.

The rest of our equipment is fairly standard gear. Manley, API, Daking, SSL, Tube-Tech, Univeral Audio and Empirical Labs for compression and Chandler Limited, Manley, API, Speck Electronics, and a Rec Pro Audio Pultec for EQ. We use Pro Tools HD as our primary DAW and use two HD I/O’s and a Burl B16 for our conversion. The B16 Mothership handles the input from the console’s program bus and supplies the primary monitoring path out of Pro Tools. It was important to me to have the absolute best conversion for monitoring back from Pro Tools as well as the best A/D for console mixes so that’s why we have the Burl. Our primary studio monitors are a pair of Adam Audio S3X-V with a pair of Yamaha H5’s for something different.

What made you decide on an API 1608 console?
We wanted a high quality, compact analog recording console that had DAW functionality, but was still a primarily an analog machine. Although the C24 was great to have as a Pro Tools controller, it wasn’t really used by students to further their engineering goals. We wanted a console that would be a good tool for teaching but also bring a sound to the studio. The API 1608 seemed to best fit that role for us.

I had worked on an API 3288 console at Echo Mountain Recording in Asheville, NC and really enjoyed using it, as well as the sound it imparted to our sessions. The 550As on every channel were really all we needed for EQ. It was great! My experience with that console informed my decision on getting the API 1608.

What makes the API 1608 a great learning tool for newer engineers?
Most students are intimidated by a large console when they first see it. I had a similar experience when I first saw an SSL Duality. The API 1608 gives them a good, manageable console on which to start learning signal flow through a console. Maybe I am old-school, but I still think that’s important to know. Not that the students will abuse the 1608, but that console is going to see a lot of use in the coming years. We wanted a console that was sturdy and modular.

The automation package is also a good tool as it allows students to interact with Pro Tools in the physical realm as well as create a stand-alone mix on the console. Although having DAW control isn’t technically necessary to get a quality mix or recording I think some level of DAW control is expected by students and people outside the university who use the studio.

How are students feeling about the 1608 so far?
Our students have been using the 1608 for just under 2 months. At first, they were a little reticent about using the console. All of them had previously been used to the C24 control surface which, although useful when mixing, was basically unused by students when tracking. The studio’s signal flow is laid out so that students generally have to use the console when they record. They do have the ability to patch to other pres or patch around the console entirely but in the heat of the moment, most of them use the console’s pres. The 1608 means there are a few more steps to go through before recording. We did some drills for the first few weeks of the semester and the students have caught on well. Later this semester we will work with mixing on the console and the advantages that come with it. Overall, I’d say the reaction to having and using the API 1608 has been overwhelmingly positive.

How do you approach teaching students about both the analog and digital realms of the recording industry?
Up till now, I had focused on teaching students how to mix in the box in the beginning because it was the most accessible way for them to learn. Current college freshman were born in 1998/1999 so they grew up using a computer. The idea that recording is done digitally and that one uses a computer to do it is normal for them. Once they get the basics of mixing in Pro Tools, we start to experiment with incorporating outboard equipment. Some students really take to it while others prefer plug-ins. My job is to make sure they have the skills needed to mix both ways and then leave it up to them to decide which style suits them best. Now with the 1608, students will have the ability to break out a mix onto the console and mix almost entirely in the analog realm. That’s something I look forward to teaching them.

What's your favorite part of working with students who are just breaking into the engineering world?
I really enjoy hearing their progress each semester with their projects. Usually, the first semester projects are rough with basic errors and lackluster mixing. By the time they make to the final class it is great to hear just how far they’ve come. In the beginning, the studio gets in the way of the final product. They’re too bogged down with the nuances of signal flow or Pro Tools to spend the time needed in pre-production, mic placement, etc., to get something that really sounds good. By the time they reach the final class they are able to wield the studio in an effective way to further their musical goals. Seeing and hearing that process is deeply satisfying for me.

If you're interested in learning more about the API 1608 and how it would fit into your studio, please feel free to contact our team of Audio Consultants via email or phone at 888.653.1184. Want to learn more about how Vintage King can help with your EDU facilities? Contact Chris Bolitho at 818.237.9181.