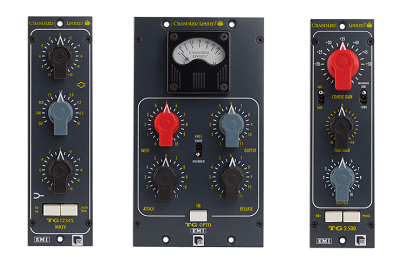 Chandler Limited has taken the TG1 Opto from their TG Microphone Cassette, TG1 Limiter and Zener Limiter and brought it to the 500 Series format in a single module. The compressor offers two distinct personalities, sharp and rounded, which can run the gamut of explosive to less obvious compression. The TG Opto compressor control-set includes selectable sharp and rounded knees, continuous input, output (makeup gain), attack, release and true bypass.

Chandler Limited EMI TG12345 MKIV EQ
Taking design elements from the historic EMI TG12345, the EMI TG12345 MKIV EQ is based on the transistor that helped shape the sound of The Beatles and Pink Floyd. This silky smooth and rich EQ features eight frequencies with the first seven being bell type and the eighth is a shelf at 10kHz.

TG2-500
The TG2-500 was the first installment of the Chandler Limited EMI/Abbey Road 500 Series line and in the time since its release it has become one of our most popular selling 500 Series modules. With the addition of the new TG12345 MKIV EQ and TG Opto compressor to a lineup including the TG2-500, you'll have a EMI TG style console channel in your 500 Series rack.