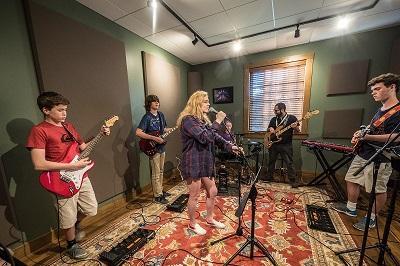 Based in Cockeysville, Maryland, Stages Music Arts is a unique educational facility that specializes in many different audio and video related programs. The school was founded by Rob Smith, who envisioned a music school that went well beyond instrument lessons and taught students about taking the next steps towards being a professional musician.

"Rob had this vision to create a facility in which musicians would have access to just about everything they would need to be a musician, no matter what 'Stage' they were at," says Stages' General Manager Ryan Glaeser. "Beginners could come for lessons on a wide range of instruments, then when they were ready, they could perform in one of our performance spaces. Once they had fine-tuned their craft, they could go record in one of our studios."

With Smith and Glaeser working side by side to make the dream a reality, the two set about finding property in the Baltimore area and designing a layout for Stages. The multi-use building now features practice/lesson rooms, two recording studios, two spaces for live performances (a 60 seat recital hall and a 200 seat outdoor area), a computer/MIDI lab, a video edit suite, and an outdoor garden area for practicing and songwriting.

Once the build out was done, Glaeser reached out to Vintage King Audio Consultant Chris Bolitho to begin the process of outfitting each space with the appropriate gear. Bolitho worked hand-in-hand with Glaeser and Smith to understand the specific needs of the school and ensure that the gear they purchased would help students reach the goals set forth by Stages.

"Working with Chris has been great so far. He took a lot of time ahead of any talks of purchasing any gear to ask about our project," Glaeser states. "He made suggestions on things we didn't think of and has pointed us in the direction of some great resources as well."

In Studio A, Bolitho helped the Stages crew land on a set-up featuring ATC monitors, two Focusrite Rednet HD32R, three Rednet 2s and a collection of new and vintage outboard gear. The focal point of the room is a SSL Duality console. "Chris was a crucial part in us acquiring the SSL Duality. We were looking at consoles in a slightly lower price range than the Duality, but Chris understood what our facility was all about," Glaesar says. "As soon as a year-old Duality came on the market highly discounted, he called me immediately to see if I was interested. We ended up with a beautiful console we didn't think we could afford because Chris was looking out for us."

Over in Studio B, Bolitho and the Stages crew selected more top-notch gear including an API 1608 32-channel console, Genelec and Focal monitors, two Rednet HD32Rs and three Rednet 2s. In the computer lab, students can perfect their MIDI work on six Apple workstations that also feature Akai Advance 49 controllers and Ableton Live. The building's recital hall features a Midas M32R console and a QSC rig featuring K12s and Ksubs.

By giving their students and staff the best in pro audio gear, Stages is well on their way to helping the next generation of musicians have a well-balanced approach to making it in the music industry.

"The goals of the building and the business are to engage young kids with music and keep them interested while teaching them difficult concepts," Glaeser says. "We want to nurture up and coming musicians who have talent, but lack directing or resources. We want to give artists a chance to get in a nice studio and get their work recorded at affordable rates."

If you're interested in learning more about how Vintage King can help take your educational institute to the next level, please contact our EDU team via email or phone at 818.237.9181.