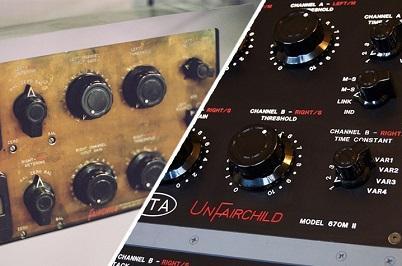 The Fairchild 660 and 670 vintage compressors are the most sought after and coveted compressors of all time. They have been the top choice for tracking and mix engineers for over five decades because of the signature glow and warmth they add to whatever source you run through them, even if no compression is actually happening. They have been the choice compressor for The Beatles, Pink Floyd, classic Motown records and many more. Loaded with 20 tubes, 14 transformers and miles of wiring, it’s no wonder that the Fairchild has a sound that has been unmatched… Until now.

UnderTone Audio is a pro audio company run by recording guru Eric Valentine. Valentine has been making records for over 25 years and worked with many of today’s top artists. He has used pretty much every piece of gear on the planet and knows how to create gear that caters to the modern tracking and mix engineer. Engineers such as Greg Wells swear by Valentine’s designs, as Wells traded in his vintage Neve console for one of UnderTone Audio’s custom recording consoles.

Recently, UnderTone Audio released the UnFairchild 670M, the company’s new take on the classic compressor. It stays true to the original design of the vintage Fairchild 670, but adds a few new features that make it a better fit for the modern studio. While the vintage version only has three main controls (input gain, threshold, and six time constant settings), the UnFairchild has expanded on that design by adding a whole host of exciting new features never before available on a Fairchild.

Watch our UnFairchild v.s. Fairchild 670 shootout below and continue on to read more of our review.

First, UnderTone Audio made careful adjustments to the circuitry to greatly improve the lifespan and reliability of the tubes. It maintains the six original time constant settings, but adds four variable time constants which allow you to adjust the attack and release times similar to a Universal Audio 1176.

The vintage Fairchild 670 had Lat/Vert setting to achieve a form of mid side compression, as it was mostly used for mastering records to vinyl to get more level and stability to the lathe. The UnFairchild MS function is designed closer to a modern MS compressor, which really opens up control on the center and side channels independently. The addition of side chain processing can allow the compressor to be triggered by an external source, and achieve the “ducking” effect. This is a great feature if you want the bass guitar to “duck” a little bit every time the kick drum hits, or have the electric guitars compress a bit every time the lead vocalist is singing.

One of the best new features, in my opinion, is the ability for True Bypass, which with the turn of a dial, you can compare the original source to the compressed version. A “VU” setting has been added to show accurate input level to the compressor from the preamp, a great addition for optimizing your gain staging. A fine adjustment to left/right balance has been added for fine tuning both channels of the compressor, allowing you to level match or precisely match compression if working in mono or stereo modes. Lastly, there is the addition of DC Threshold and Feed-back vs Feed-Forward functionality, which can make the UnFairchild work and sound like a more modern compressor such as the API 2500.

I’ve used a couple vintage Fairchilds in the past, which I always thought sounded amazing, but there was always something slightly wrong with them. Whether it be a bit of noise running through the circuitry, scratchy potentiometers or old tubes that seem to weaken the signal. This is common on the vintage units because of their age, and the high cost of having a tech service the compressor, as each tube can range from $200 and above in the vintage unit.

The vintage Fairchild 670 I got to use for this demo was in absolute perfect condition, as it had just been restored by the Vintage King Tech Shop. The Vintage King technicians always do a fantastic job on restorations, but I was thoroughly impressed by how well this compressor turned out. They did everything from replacing all the tubes with perfect matched vintage stock, oiling the potentiometers so they moved like butter, repainting the faceplate exactly like the original design, building a custom chassis to fit in a modern rack, supply an external rack mountable power supply and tightening all the loose wiring on the inside.

At the 45 Factory recording facility just outside Detroit, owner Ryan McGuire has an Undertone Audio UnFairchild 670M, which I have been lucky enough to use on countless projects over the last couple months. We thought it would be really cool if we did a shootout between the vintage Fairchild 670 and the UnderTone Audio UnFairchild 670M, as no one has ever compared the two before. So we brought the vintage Fairchild to his studio, which made me extremely nervous driving across town with a $55,000 compressor. I felt like I should have had a “Baby on Board” sticker on my car.

We pulled out his Shadow Hills Mastering Compressor to make room for the Fairchild, which was right next to the UnFairchild in his second rack. We made a joke that I was like Atlas holding up the vintage Fairchild as we were installing it into the rack, as it weighs in at over 60 lbs. It wasn’t easy to hold still while being nervous of messing up such an expensive piece of gear.

Once we got the compressors hooked up, we thought we should run a variety of sources through it for comparisons. We choose electric bass, electric guitar on a cleaner overdrive setting, male vocal, female vocal and a full drum kit. We started with dialing in the settings on the vintage Fairchild first, then tried to match them using the UnFairchild.

The first thing that I noticed is that the threshold control is much touchier on the vintage unit. It was set to just over “1” and compressing about 3dB, while the UnFairchild was set to around “6” for the same compression. I think this is because the vintage unit wasn't used to getting signals as loud as today’s modern recording levels, whereas the UnFairchild was built for use in today’s studio setting.

I noticed that the input levels were about one click lower on the UnFairchild to achieve the same gain staging into the compressor, where the channel dial on our Tree Audio Roots console was about two clicks higher (4dB) on the vintage unit to get the same output level to the mix bus. I kept the time constants the same on both units, which was set to three, and they appeared to be working exactly the same.

After running all of the signals through both pieces of gear, I was amazed by how close both of them sounded. In a blind test between the two compressors, it was hard for myself, Ryan, and Vintage King’s videographer Dustin McLaughlin, to tell them apart.

The Undertone Audio UnFairchild 670M is priced at $9,995, which is significantly less than the $55K+ it costs for a vintage Fairchild. With the sound so close on each unit, I think that is an amazing price to pay for the classic sound of the vintage 670. They both have a slightly different characteristic in the glow factor, which I personally think the vintage unit is a little darker or warmer sounding than the UnFairchild. After running a Lang PEQ-2 equalizer (which is similar to a Pultec EQP-1a without the tube circuitry) after the UnFairchild, it easily matched the warmth of the vintage unit, even surpassed it a bit.

I think the knobs on the vintage unit feel a little better, which is such a small detail to nitpick and has nothing to do with the tone, but the weight and feel of them as well as the clicking between settings and input gain was more satisfying.

If you are looking to add a serious compression upgrade to your studio without refinancing your house, I highly recommend the UnderTone Audio UnFairchild 670M. I think that Eric Valentine and his team at UnderTone Audio knocked this one out of the park. I’m so glad I get to use one daily at the 45 Factory, and looking forward to all the projects coming up that it will add that vintage magic to.


Need to know how you can own one of these UnderTone Audio UnFairchilds? You can find out more by contacting your Vintage King Audio Consultant via email or phone at 888.653.1184. Did you know that Vintage King is the authority on restoring vintage Fairchild units? Watch our video below to see the entire process.