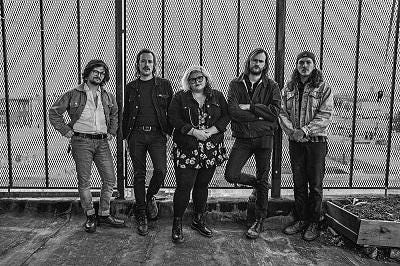 Listen to the first ten seconds of any Sheer Mag song and you won't be able to stop. The Philly-based band's hook-heavy Thin Lizzy-inspired riffs, disco-y beats and powerhouse vocals have led them to become one of America's hottest rock 'n' roll outfits.

The true magic of Sheer Mag's approach to music though may lie in their recording techniques. The band's studio braintrust, brothers Kyle and Hart Seely, have committed to keeping the band tracking on analog tape, a move that harkens back to the beginning of the project in a South Philly bedroom.

"Hart and I set up an 8-track tape machine and recorded some songs that would become the band's first seven-inch," Kyle Seely says. "We just used a bunch of random drums that were laying around in the house. I don’t think we could find a hi-hat clutch so we put a tambourine on it to hold them down. Very bare bones set-up and I definitely think there was some beginner's luck involved."

Beginner's luck or not, the style has purveyed as the band prepares to release its new album, Need To Feel Your Love, in July. Before hitting the road for the summer, we caught up with Kyle and Hart Seely to talk about recording in their now-condemned studio space, getting guitar tones and the influence of gear on their creativity.

Have you always recorded on tape or was that something that happened at the start of Sheer Mag?
Kyle Seely:
I owe that credit to our buddy Hunter Davidson who runs Business District Studios up in Binghamton, NY. Hart and I first got introduced to recording on tape by working with him with our previous band, Sirs. He's a studio wiz, collector of super rare audio gear and basically has the best ear for production out of anyone I know.

I remember one night we had an insanely long drum tracking session, instead of going to sleep afterward, he stayed up hand winding his own cables. Then when I woke up the next morning, he had already gone out to a rummage sale and brought back an insanely sick Ludwig drumset for like 30 bucks. One of the hardest working people out there. Would definitely consider him one of our production mentors. He still mixes our records and brings out aspects of our music that I didn't even know existed.

What does recording to tape lend to the band's sound?
KS: I think recording on tape is crucial to our sound. In my opinion, you can goof around with vintage guitars and tube amps in the studio all day long, but if you want to get a really cool warm and distinctive tone, tape is the only way to go. Neither of us are really gear heads, so a lot of the time we just use gear that's laying around so that we can get some variety.

I think that something about the range of frequencies from tape is the only way rock music should be recorded, with the exception of some metal I guess. I don't want to back myself into a corner as some total purist, but I wouldn't really consider tracking Sheer Mag digitally unless we were trying to branch out and do something new.

What's the set-up like in your studio space?
Hart Seely: The studio is having a little “intermission,” shall we say, because the building was condemned last month after a drug raid in the space right below us. So no more recording for us… Until we move presumably.

We got these office cubicle walls for free from this studio outside of Philly one day, so we can kinda get some isolation while still using the room as a practice space too.

What kind of microphones do you use in the studio? What about specifically for vocals?
HS: 57s on the drums and that Shure kick mic on bass with a 57 too. 57 on guitars. Pretty simple. I use the 414s for some different stuff but always for vox. One of those goes in front of Tina [Halladay, the band's vocalist], then into my mixer where it gets sent to a delay pedal for some slapback, into the Marshall from there, and then I use the other one on the amp going into the Pro VLA. The distortion, delay and reverb will change from song to song, but that's our basic setup.

You guys have a pretty distinct guitar tone that comes across when playing live and on the records. How have you captured that in the studio? What's your process of recording guitars like?
KS: It varies, but basically we double every lead guitar part to give it that beefier almost chorus-y tone. I tracked all of our new record with my Fender Deluxe Nashville Telecaster. It's got three single coils, so it's sort of a cross between a Tele and a Strat.

For rhythm guitar, we usually try to get a more shimmery clean tone and bury it in the mix a bit. We actually experiment more with rhythm guitar than we do with lead. We’ll add a delay that matches the BPM of the song to make it more atmospheric or add chorus. The balance between the two guitars is a big aspect of our music.

HS: We'll mess around with tones on guitar (mostly for the cleaner stuff) probably too long on some songs, but if we don't then there's a good chance we end up tracking it all again, so I don't know... We used an Empress paraEQ pedal a lot on the new record which I really like, boosting certain parts as we tracked. Pretty sure all the guitars are with a 57 on the 50-watt JCM, at least on the new record.

How much does the gear you use influence your sound or creativity?
KS: I think Hart and I would both agree that our creativity is at its best when we have limits and constraints. We end up recording things in weird ways that are probably stupid but sorta distinct I guess. For example, one time we wanted to get a gated reverb on a snare for a different band. We only had a few things laying around so we ended up putting a mic on the snare and running that into a Twin Reverb with the reverb all the way up, then used a noise suppressor pedal to gate it on the way into the board. We felt really stupid at the time, but it ended up sounding kinda cool. If we had a ton of rack gear, we’d probably just argue all day instead of getting things done.

When reading reviews of Sheer Mag, reviewers seem to always make note of the band's recording style. Why do you think people have responded so well to this?
KS: I think that there's so much about recording that Hart and I don't know, but we definitely know what we like. Maybe that's part of the charm? It's cool that people like what we're doing. We just wanted to emulate some of the sounds of our favorite old punk, metal and disco records. I don't know if we got that right, but we came up with something!

HS: I think the actual sound is pleasing to the ear for people. It's honestly kind of hard to fuck up recording to tape, in my opinion, especially on a four-track or something. I think I just always like it. I hope people are still into the sound despite me getting better at tracking!

Continue on below to check out the title track from Sheer Mag's new album, Need To Feel Your Love, along with some recordings from their first few self-released records.