Make Your Mark With Jen David of Third Wave Music 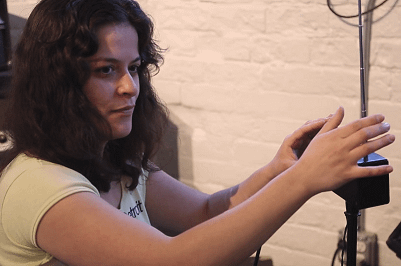 Asking yourself the question, "What am I doing with my life?" is one of the toughest moments for anyone, let alone a musician struggling to do what they love for a living. For Third Wave Music owner Jen David, it served as a moment of inspiration.

If there were ever a person bred to run a music store, it would be Jen David. Born to highly musical parents, David grew up learning Bach from her jazz pianist father while helping her mother run the music stores that she managed in the Metro-Detroit area.

Since making the decision to open a shop with gear, accessories and more, David has worked diligently alongside her husband, Jeffrey Thomas, to launch Third Wave Music. Serving as the first proper music store within in the Detroit city limits in years, the couple has fostered a space that is as much about creativity and inclusiveness as it is about providing gear to musicians.

In our new Make Your Mark feature, we visit Jen at the Cass Corridor-based store to talk about her inspiration for the space, the journey to grand opening day and beating the reputation of music store snobbery. Continue reading below our video for an extended interview.

Where does the name, Third Wave Music, come from?

Third Wave was a combination of three different things. There's a sci-fi book called The Third Wave and that's actually where techno music got its name from. There is a chapter called "The Techno Rebels." I started reading that book and I was like "Wow, this is so interesting." It's about predicting our relationship with technology in the future.

Then, Third Wave feminism. Women taking powerful positions and not feeling like they have to be a certain way or do a certain job because they are a woman. Also, a major third is one of the most harmonious sounds. The sound waves are beautifully in sync. Plus, I love the number three.

The building where Third Wave Music is located, The Forest Arms, is a pretty well-known place in Detroit. What's your history with the building and how did you end up in this space?
The Forest Arms is a beautiful, large apartment building that had a fire in 2008 and people thought it was going to end up getting demolished or not fixed up. Why it's super special to me is that you open up this door on the first Saturday after Labor Day and the Forest Stage of Dally in the Alley [a free Cass Corridor-based festival] is right there. When I first moved to the city, one of the first organizations I got involved with was Dally in the Alley. I lived in the alley.

When I was living across the street from here, they started renovating the building and the gears started turning. I found out who the owner was and I came through and was like "What's going on with that space? I kind of have this idea for a music store." The landlord was like "That's an awesome idea being so close to Wayne State and Detroit School of Arts. That's great." At this point, Midtown is big, he could have got Shinola Jr. to open up in here if he wanted to, but I think he cares about having a neighborhood spot.

What happened in the time since your initial conversation with the building's owner and the opening of the store in November 2016?
Their construction took twice as long as they thought. Our build-out took twice as long as we thought. Going from the nebulous of the idea two years ago to making it happen was a lot of hurdles of funding, loans, grants, promotion, marketing, acquiring merchandise, figuring out the business plan and then the literal build-out of the space.

While we waited for their build-out to happen and all the pieces to fall into place, we started hoarding all of the inventory at our house. Our whole upstairs, our bed, our bedroom, our closet, was completely filled with instruments. The whole main area of our house was filled and you'd have to climb over instruments just to get to the bathroom. Once we finally got in here and opened, we started putting things out and they started moving.

It was also a matter of figuring out the flow of the store. Opening then draining all of our capital and now we are slowly building it back up. I'll sell a synth and a couple of guitars and then it's like "Sweet, I can buy this display table." Sell a couple more things and I can bring on a new product line. Sell a couple more things and I can buy paint for the sign I wanted to finish. Each month, we are becoming more and more of a finished idea and continuing to grow.

Music stores have this notorious reputation for being staffed by snobs and making people feel unwanted or lesser than. Third Wave Music seems like the opposite. Talk about the inclusive environment you've created here at the shop.
Part of the feeling that I wanted to convey was to be super encouraging, super welcoming and try to get strangers to play together. My vibe going into guitar shops was always like "Oh God, I don't want to go in there. They are going to be so rude. It's going to be so awkward. I'm afraid to ask questions."

I thought just by being a woman and opening a music store, all the female players I knew would come in, but it's almost like we've gotten to the point where we are training ourselves to avoid music stores generally. You feel like you have to build up a lot of knowledge before you feel comfortable coming in. I try to just share that knowledge without being condescending.

Music is great, everyone should play music. There is no reason why it makes anyone better or smarter or more interesting than anyone else just because of some facts that you know or how many scales you can riff. I think that comes from the mix of having a jazz playing dad and a suburban music store mom. Somewhere, I'm swirled in the middle. I'm professional, but I'm still just like "Weirdos are welcome."

What makes you excited about working in the shop? What makes you feel like this is what you should be doing?
There are certain coincidences that I feel like are a part of a cosmic sense of humor and that remind me I'm on the right path. Someone brought in a synth that had my name on it. It had "Jen" on the synth and I think it's a middle child thing, but I love when something has my name on it. So I'm looking up this synth, it's a Jen Synth-Tone SX1000, and it's an obscure Italian company called Jen Electronics. I look up the company and they are from Pescara, Italy, and my mom's side of the family emigrated from Ascoli Piceno, which is less than like an hour away from where Jen Electronics was headquartered. So this synth has weirdly had the same path as I did and somehow we met here in the store. I was like, "OK, that means I'm doing something right."

Where do you want to see the store go from here?
I'm hoping that this stays a convenience location where it's a repair drop-off/pick-up point, we have all the accessories and a small, but curated selection of gear mixed with retail stuff. The long term goal is that I want to open up a space that has two wings; one wing has practice areas, one wing is lesson rooms and in the middle is a retail area. So there are people actively playing, actively learning and all of their supplies are in the middle. More storage, more lesson rooms, more practice rooms and have that be a bigger aspect of what we do.