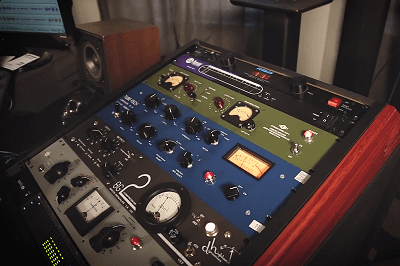 Since the creation of the compressor, this essential studio tool has hardly left the side of discerning engineers, producers and musicians. Whether you're trying to make a vocal stand out or give definition to a drum hit, the compressor can do a whole wide range of things for any track you're working on.

This compressor shootout is unique from others, as Dave doesn't tweak the settings of each compressor while the track plays. Instead, he has set all of the compressors set as close to each other as possible. This way when you listen to each compressor you can actually here what the piece of gear is doing.

Watch our seven compressor shootout below and continue reading to get more info on each one and hear the isolated tracks.

As with many Chandler Limited products in recent years, the RS124 is modeled after gear from EMI/Abbey Road Studios. Chandler's take on the famed RS124 actually features settings for three different variations of the compressor, in addition to the traditional settings, including attack and release.

Highland Dynamics BG2
The BG2 has an interesting approach to the world of compression, as this tube compressor offers two different feedback modes. With British mode engaged, you can expect the sound of a modified Altec 436 with plate-to-plate style feedback. If you're using the compressor in American mode, you'll get a lively, robust sound with just the right touch of colorization.

Tube Tech CL 1B
There's a reason that the CL 1B is one of the most beloved compressors in pop music and that's because it offers some of the smoothest compression around. In addition, it does its job transparently and never leaves any trace of color behind on your tracks.

Acme Opticom XLA-3
Born and bred in Detroit, Michigan, via the brain of studio vet Al Sutton, the Acme Opticom XLA-3 is a military spec compressor built to give you a wide range of dynamic effects when recording or mixing. The XLA-3's triple optoelectronic circuit offers up three different kinds of compression with varying results that range from clean to dirty.

Retro Instruments 176
Based on Bill Putnam's 176 Valve Limiter, the Retro Instruments 176 has become a go-to compressor for some of today's top working engineers including Chris Lord-Alge and Jacquire King. While the design features all of the classic bells and whistles of the original, the new version features a bypass switch, stereo linking and a highpass filter.

If you are interested in any of the compressors mentioned in this blog, please contact a Vintage King Audio Consultant via email or by phone at 866.644.0160.
Categories: Shootouts & News and Events
Posted By: Eric Allen