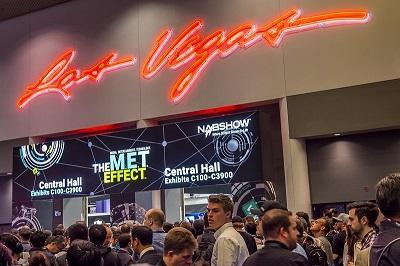 The National Association of Broadcasters, which holds its annual convention in Las Vegas, opened its doors to anyone working in the converging worlds of media, entertainment and technology this past weekend. While many of the exhibits focused on television, radio, cable and internet production, distribution and delivery, there were still plenty of audio products on display for content producers working in other fields to check out.

The monitor maker brought its new Shape loudspeakers to the NAB Show. This new series of reference monitors features an innovative woofer design that incorporates flax and glass fiber. The driver’s TMD surround offers a linear frequency response curve with significantly reduced distortion in the critical 1 kHz to 2 kHz range.

Neumann has launched the KH80 two-way active monitor, a compact 4-inch nearfield with network-controlled, on-board DSP for auto calibration and alignment. Some of the features are aimed at broadcasters — such as adjustable lip sync — but it certainly has its applications in the music studio.

Mic makers took the opportunity to launch a variety of new products. Shure introduced what they are calling its most advanced wireless platform to date, the Axient Digital Wireless System. The new system stands on the shoulders of the company’s UHF-R, ULX-D and Axient wireless systems and features two transmitters, the AD Series and ADX Series. Axient Digital ADX Series transmitters incorporate ShowLink, which provides real-time control of all transmitter parameters with interference detection and avoidance.

A GoPro-certified microphone complement to the HERO4 Black and Silver camera range was introduced by Sennheiser. The new MKE 2 microphone is based on the brand’s classic lavalier mic element. It can take a beating, thanks to its elastic suspension and a novel windshield that keeps working even when wet — as Sennheiser demonstrated by submerging it at their booth.

Audio-Technica unveiled its new 6000 Series High-Density Wireless System, which can accommodate 31 simultaneous channels in 4 MHz of bandwidth. Mindful of the FCC’s recent Incentive Auction, which takes away access to much of the 600 MHz band, the 6000 Series operates between 944 and 952 MHz in unlicensed spectrum above the TV channels.

DPA Microphones surprised show goers with its new d:vice MMA-A Digital Audio Interface, a high-quality, two-channel microphone preamp and A/D converter offering mono, dual and stereo capabilities that works with any iOS device, Mac or PC computer. It’s aimed at journalists, but alternatively offers musicians and sound designers a way to record while on the move.

Showing off their new recorder, the DA-6400, TASCAM introduced this 64-channel digital multitrack machine that writes to an internal SSD drive caddy while also offering MADI and Dante options. The company’s new SS-R250W playback unit, also on display at the show, includes a comprehensive remote and is also available with an optional Dante card.

There was plenty to see for audio post production pros, too. Avid announced a slew of new products and cloud services, including the integration of native 7.1.4 Dolby Atmos panning, automation and rendering into Pro Tools 12.9, due Q2, and deep Avid pro mixing control surface integration.

For live sound, Yamaha’s new CS-R10-S control surface offers a smaller version of its current CS-R10 and offers a dual console function that connects CS-R10 and CS-R10-S surfaces to a single DSP-R10 DSP engine for use at both FOH and monitor positions. Yamaha Commercial Audio Systems celebrated its 30 years in business with a display of historic and groundbreaking digital mixers and recorders including the DMC 1000 and DMR-8.

Eventide
Finally, one journalist reported getting a sneak peek at Eventide’s next version of the H9000 multi-effects unit: “four quad processors, app control, wi-fi control, and more I/O than you can imagine,” he writes. The final version could be launched at the AES Convention in New York this fall.

If you're interested in learning more about any of the new products that were announced at NAB 2017, please contact our team of Audio Consultants via email or by phone at 888.653.1184.