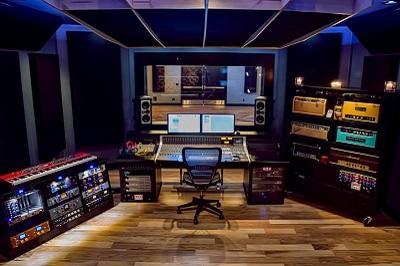 With over a decade of experience in the music industry, Neil Greenhaw is an entrepreneur and music producer living in Bentonville, Arkansas. When looking at Bentonville and thinking about what it needed, Greenhaw saw an opportunity to create a recording and mixing mecca that could service the entire Central United States. Enter Haxton Road Studios.

"I wanted to help create a culture in Northwest Arkansas of musical excellence," Greenhaw says. "I don’t believe the perfect studio exists anywhere but we’ve certainly built something special and our live room has that magic sound that you look for when cutting records."

After deciding to build from the ground up, Neil contacted Vintage King and began working with Darrin Fendley of Vintage King Nashville to outfit the studio with gear. Neil's design concept? To create a space that fosters creativity and caters to artists and their songs.

"I’d rather make one solid record at a time that moves the musical soul than I would turn out dozens of projects that pay the bills but leave no impact and no substance," Greenhaw states. "This played a major part in the way the studio was designed. Quality gear and rooms are a must in any professional studio, but taking each space and thinking through the uses and the vibe needed to keep creativity at the forefront takes time and vision."

"Working with Neil has been great. We spent a lot of time leading up to the sale talking about and designing just the right list of equipment," says Vintage King Audio Consultant Darrin Fendley. "Haxton Road brings the best new gear from companies like Shadow Hills Industries, Solid State Logic and Barefoot Sound together with classics from Neumann, Urei and Neve."

The centerpiece of the studio's control room is a brand new 48-channel Solid State Logic AWS 948 Delta console. Greenhaw's love for SSL consoles dates back to his days tracking through them as a Nashville session player.

"I chose the SSL AWS 948 Delta because I wanted flexibility," Greenhaw says. "It was important to me to have an analog path with the SSL preamps, EQ on each channel, and the Master Buss Compressor, but I also wanted to maintain digital control for Pro Tools HD and be able to write automation. The AWS also features Total Recall which is amazing for our workflow."

While the doors at Haxton Road Studios have only been open for four months, Greenhaw already has his eyes set on future projects for the studio space. In addition to acting as a place for artists to work on recording their songs, Haxton Road Studios is set to expand into publishing, a label and the digital marketing space.

"I hope that Haxton will continue to build relationships within the music industry and also continue to attract talent from all over the world with great songs to come in and use our space," Greenhaw says. "It makes sense and we have the right staff to make it happen. I look forward to watching it all unfold."

If you'd like to learn more about how Vintage King can outfit your recording studio with a console or large package of gear, please fill out the form below and one of our Audio Consultants will reach out to you.