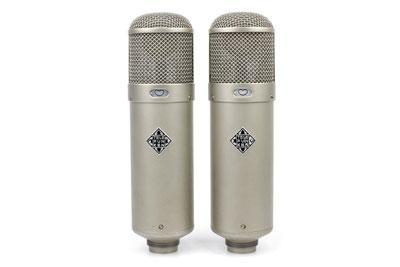 We've been extremely fortunate to handle some world-class microphones at the Vintage King Tech Shop, but none so far compare to these vintage Neumann U47s that recently came into our hands. The word "pristine" barely does any justice to describe these microphones, as they truly are in museum-like condition. The two sequentially numbered mics are from the mid-1950s and have absolutely blown away any other U47s we've seen from the same era.

The Neumann U47 is a large diaphragm tube microphone that has become the most revered vocal microphone in history. It was originally invented in 1947 (hence the model number), and manufactured from 1949 through 1963. The microphone features two polar patterns - cardioid and omni - and because of its dual diaphragm, it was the first condenser microphone with a switchable pattern, available by using a switch under the grille. A later revision from 1957, which allowed for use in cardioid and figure-8 patterns, was named the U-48. Other than the polar patterns, the mics are identical. The U48 was not invented in 1948; the number 8 refers to the pattern.

We wanted to take a closer look at these U47s, so we asked Vintage King's Co-Founder Mike Nehra and Director of Business Development Ryan McGuire to give us the lowdown on them. Watch the videos below to learn more about the history of the U47, the best uses for them in the studio and how Vintage King goes about reviving vintage microphones for a new generation of engineers and producers.

Unfortunately, these two sequentially numbered, vintage Neumann U47s, have been sold since this blog was published. We are constantly getting new stock of vintage microphones, if you're interested in finding what that meets your needs, you can contact our audio consultants via email or by calling us at 888.653.1184.

Products in this Article

Categories: Around the Shop
Tags: Neumann
Posted By: Eric Allen