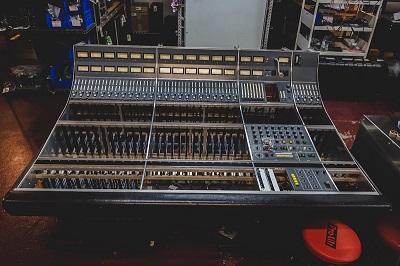 Currently in the Vintage King Tech Shop, our console team is restoring a vintage Neve 8058. We've been tracking the process of their work so far and in the coming weeks we will continue to update this blog with their efforts. Continue reading below to learn more about the history of the 8058 from Vintage King Co-Founder Mike Nehra and follow along as our team works toward completing this incredible console.

Back in the day when my brother Andrew and I were recording artists exploring the amazing depths of analog recording gear, we were introduced to Neve 8058 and 8068 consoles through producer-engineer Ron St. Germaine. Ron had cut his teeth at the classic Media Sound and Power Station recording studios in NYC and was fond of working on their Neve 8068s. We needed to find a studio to cut an album we were working on with Ron and we collectively chose Muscle Shoals in Alabama for a couple reasons; the studio's rich history and the fact it had one of these Neves to work on.

What we loved so much about the desk and excited us to track our next record on it, was the fact it had the classic Neve 80 series 31102 mic pre/eq modules on every channel, as well as what Ron described at the best compressor/limiter on the planet built into the desk - a handful of Neve 32264a compressor/limiters. He loved these units because of their classic Neve tone, flexibility and fast release times on both the compressor and limiter sections. He called it his "desert island limiter - if I could only have one, this would be it!"

We wanted to track thru a desk where the signal went in and came out sounding a bit larger than life. Neve 8058s and 8068s do exactly that. There’s something magical and euphoric about what they do to signals running through them. The 31102’s front end preamps tend to smear things just a bit, giving a subtle harmonic distortion richness that helps blend the individual tracks together nicely. You don’t need to "fight" the signal to blend tracks nor use too much EQ as a result. 31102’s have the same pres as what you find in a 1073, 1066, 1084 and other classic Neve Class A modules. The Neve 31102’s EQ section is nearly identical to that of a 1084. Well chosen EQ points with switchable frequencies of 10k, 12k and 16k on the top end, with a handy HI-Q switch allowing you to narrow the curve of the mid-range frequencies when engaged. They have super useful hi and lo pass filters with just the right roll-off points.

The key difference between an 8058 and 8068 is the latter is a 32-channel while an 8058 is a 28-channel desk. Another key feature that sets these desks apart from earlier classic Neves is the fact they have so many aux sends - 8 aux per channel. Handy for tracking and mixing.

These desks are considered by many as the quintessential classic Neve 80 series - the holy grail for tracking. They were used in premier studios around the world in the 70s and 80s, before it became fashionable to move towards larger, more feature-packed desks as SSLs and Neve VRs. Many rooms would have a classic Neve like these for tracking and an SSL or VR for mixing.

They have survived the times and made it thru different trends in recording and workflows and are still hugely desirable to work on. When properly restored, they sell for a premium, still thrilling and inspiring artist, producers and engineers recording through them. There’s something about their compact, yet stately appearance, with their classic upswung arched meter bridge that’s simply impressive to sit behind and work on!

Long Live Neve classic Neve. If you’ve never experienced working on one, make it a point to find a way to record a session on one. You need to experience their sound to understand where I’m coming from.

Tracking The Restoration Of A Neve 8058 With Vintage King

A busy week for the Vintage King console team starts with cleaning and servicing modules from the Neve 8058. Console tech Rich is finishing up work on all of the 32408 modules and has begun QC Testing. Rick, Nick, Cedric and Jam have also been steadily working on more modules from the console including 31102, 32408, 32404 and more.

March 28, 2017
As Rich finishes up QC Testing on the 32408 modules, he starts work on 32427 modules and handling some of the console's framework. Work has continued elsewhere on the desk as John picks up traction on 14 of the desk's 32404 switching and aux bus modules. The team of Cedric and Nick continue cleaning the Neve's faders, switches and side panels, while also adding in some new cosmetic touches.

April 4, 2017
It's getting exciting in the tech shop as more and more modules are being completed and loaded up into the desk. This week Cedric completed 13 of the console's faders while Rich loaded in 32408 modules and worked on the frame and center section. Nick also lent a hand with the cosmetics as he worked on side panels for the 32408 and 32404.

April 25, 2017
Rick has been knocking out 31102 modules left and right, as he completed servicing on 10 modules in the past two weeks. Meanwhile, John is continuing to service 32404 modules and Rich handles the cosmetics on the finished ones and cleans up the console's center section. As for the console's faders, Cedric has finished all servicing on them and the bottom fader panels have been sent out for refinishing to match the fader top panels.

May 5,2017
Work has been continuing on the console, as Rick is finishing up two 32264 and three 31102 modules this week. In addition to these modules, he has also completed work on 22 of 24 of the 31102 EQ modules for the Neve 8058. Cedric has been working on the fader panel art and has approved the final version to be printed and readied to use on the console.

May 23, 2017
The team has been busy with QCing modules and handling the more cosmetic aspects of the console. Rich has had a hand in both tasks, as he has finished QCing the 32404 modules and worked on the cosmetics of the 31102 modules with help from Nick. Meanwhile, Cedric has been shopping for armrest materials, overseeing the silk screening of the new faders and recapping 32074 modules.

June 6, 2017
Rich has continued working on 31102 cosmetics, installed the phase meter into the desk and serviced some of the 32074 modules. The aluminum trim pieces of the desk were in need of a paint job, so Cedric coordinated with a local shop to have them stripped and repainted. Nick has also been hard at work handling 31102 module cosmetics and putting back together fader assemblies.

June 20, 2017
The team has been busy as the trim pieces and faders have come back into the shop and work has started on reinstalling them. Additionally, the console's arm rest has been reupholstered and is ready to roll.

July 3, 2017
This week Rich Hunt re-installed the new aluminum side trim pieces. The team also measured the old rear cover in preparation for using it to match a brand new rear cover.

Mark Wilson has brought in the custom rear panel for the Neve 8058 and the team has installed it. We are nearing the end of this restoration!

August 7, 2017
There have been a few final touches on the console, including adding a pre-monitor headphone output to a modified front panel with individual left and right potentiometer controls. New speaker mounts have been delivered and installed as well.

Continue below to see photos of the recently restored vintage Neve 8058 that has been chronicled throughout this blog. If you are interested in this desk or having a console premium serviced by Vintage King, our helpful staff of Audio Consultants are available via email or by phone at 888.653.1184.