Toward The Riff-Filled Land: 11 Heavy Tones For High Times 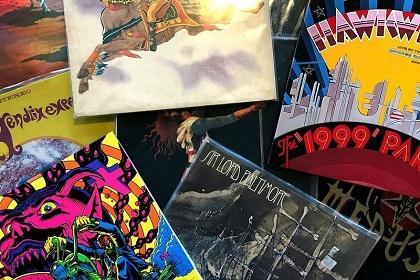 Bigger. Badder. Louder. Slower. Pioneered by Black Sabbath then perfected by Saint Vitus and Sleep, the bulldozing sounds of metal guitars have long been the calling card of the heaviest of days. In honor of today in particular, we've selected some of our favorite guitar pedals to recreate classic riffs from over four decades of timeless metal artists. Continue reading toward the riff-filled land! Proceed!

All hail the masters of slow, churning, anthemic riffs! In order to get his signature sound, Tony Iommi would run his Rangemaster treble booster into a cranked Laney Supergroup. To replicate the sound in "Black Sabbath," we chose the Sabbra Cadabra since it pays a beautiful homage to Iommi's riffs by capturing the sharp attack of his tone.

Led by rock 'n' roll lifer Bobby Liebling, Pentagram picked up the hard rock reins from Black Sabbath, Blue Cheer and Kiss, only to add even heavier, more demonic sounding tones to their arsenal. When recreating the riff from "Forever My Queen", we used the Filth pedal from Joe Gore. Although the Filth only has four controls, it has a massive range of vintage fuzz tones. The silder controls alter the voltages of the transistors. This radically changes the tone, timbre, response, attack, sustain and compression.

After the reign of bands from the New Wave of British Heavy Metal ended, it opened a void for groups like Candlemass to get back to the basics of what made the genre so special in the first place. On "Solitude" from Epicus Doomicus Metallicus, a longing acoustic guitar intro kicks into a heavy riff that we've captured using the Air Space Invader from Rainger FX. The pedal is a white noise, autowah, fuzz pedal and when you plug in the Igor expression pedal, you can control the range of the filter.

Many might recognize Hawkwind as being one of Lemmy's earlier bands, but they deserve the more distinct honor of being remembered as one of the purveyors of proto-metal. Their swirling cacophony of heavy, psychedelic riffs, can be best heard on albums like Warrior on the Edge of Time and In Search of Space. For "Brainstorm" from Doremi Fasol Latido, we used the Chase Bliss Audio Brothers pedal, which is a dual channel, digitally controlled analog drive. To nail Dave Brock's guitar sound, we stacked Fuzz B into Fuzz A to get that soft attack with a nice wooly breakup.

Creating an early American model of what would become doom metal, Saint Vitus mixed Sabbath sounds with the hardcore of their SST labelmates Black Flag. The band's song "Born Too Late" is truly a riff that launched thousands of bands, as the sound would be copped for decades after it was recorded. What makes the Moog Music MF Drive so unique, and perfect for this song, is its signature ladder filter. You can shape cocked wah fuzz sounds that really cut through the mix.

Before Josh Homme became well known in Queens of the Stone Age, the guitarist started out with Kyuss, a band of four desert dwellers who created killer riffs. When trying to recreate their song "Gardenia" from Welcome to Sky Valley, we chose to use the EHX Bass Big Muff Pi. This pedal is inspired by their green Russian muff from the 90s and it perfectly nails that scooped sound that Homme achieved on this track.

In terms of modern classics, no metal album looms larger than Dopesmoker. As the magnum opus of Bay Area giants Sleep, this hour long record pushes the threshold of just how long one riff can exist in space and time. To recreate these heavy sounds with just one pedal, we used the Chase Bliss Audio Brothers with Fuzz B stacked into Fuzz A because it perfectly achieves that granular, amp ready to explode sound.

Electric Wizard rewrote the Black Sabbath playbook in the mid-1990s, adding to it different layers, buried vocals and unique sound collage elements. For the song "Funeropolis," we wanted to use something similar to the Elka Dizzy Tone pedal, which features a Tonebender-voiced circuit. This is one of the loudest and heaviest fuzz pedals ever made. Thankfully, Jext Telez has painstakingly recreated the Dizzy Tone, as the originals will run you upward of $1000 on the open market.

Building off the desert highway sounds he created in Kyuss, Josh Homme's Queens of the Stone Age riffs with the best of them while still making the accessible music that would propel the band to fame. When playing "Avon" from the band's debut LP, we used the brand new Strymon Sunset. This dual overdrive offers a myriad of foundation tones, but we found that the "hard" mode captures the tight, yet soft attack from this classic riff.

Formed by Matt Pike of the aforementioned Sleep, High on Fire has set the world ablaze since 1998 with heavy riffing and thundering vocals. The new Meris Ottobit Jr. might seem like an odd pick to build a tone for the riff from "10,000 Years," but this pedal can rip your head off. Cranking the Filter clockwise and the Bits counter-clockwise gives you one of the gnarliest, gated fuzz sounds out there.

While what we created for our video isn't exactly a SUNN O))) riff or song, we have always been inspired by the masters of drone, doom, ambient and more. We let our guitar, Moog MF Drive and Strymon Sunset go crazy for a bit and came up with a little something to honor our favorite hooded druids.

If you want help getting tasty tone for your heavy riffing, we can help with that! Please contact a Vintage King Audio Consultant via email or by phone at 866.644.0160.
Products in this Article
Categories: Guitar, Amps, Pedals & Fun Stuff
Posted By: Eric Allen