Make Your Mark With Kevin Augunas of Fairfax Recordings 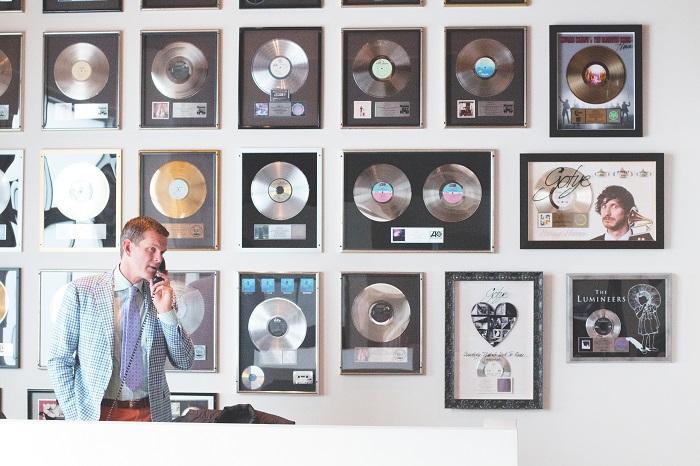 Grammy Award winner Kevin Augunas is best known for his work with The Lumineers, Cold War Kids and Gotye, but his career extends far beyond just production. As the head of Fairfax Recordings (housed in the former Sound City Studios), Augunas has evolved his place in the music industry by becoming a studio and record label owner.

In our latest Make Your Mark, we visit Augunas at Fairfax Recordings and learned more about his life in the world of recording and beyond. Watch the mini-doc on Kevin below and read an expanded interview to find out how he ended up at Sound City, his choices in gear and his favorite part of working in the studio.

How’d you get your start in the recording studio?
I started out as a session bass player. I was touring quite a bit in the mid-90s and was finding I was getting more joy out of staying in one place and making records. When you’re on the road and playing the same 10 to 13 songs every night, if you have nothing to do with the writing of them or the recording of them, you don’t have a vested or emotional interest in them. Artistically and creatively, I was finding I was having more fun being at home and recording for bands and friends and working on other projects.

When I was doing a lot of touring, I was spending a lot of time in Europe and the vintage craze hadn’t really started yet. So I was finding a lot of equipment for pretty cheap and people didn’t really want it. In the mid-90s in England, there were a lot of SSLs and U 87s. You could find a lot of tube gear for really cheap and so I was collecting that stuff. It really started from collecting gear, creating a studio in my little apartment and recording stuff there. From there, it just kind of grew; more mics, more gear, you outgrow something and you want to get something different.

Before I knew it, I moved back to California, where I’m from, and wanted a bigger space so I could do more recording. After awhile you start hearing the environment you’re recording in more and more. You start realizing that the environment is probably more important than the actual gear. I moved to a different house, I liked the way that house sounded, and then after awhile I could hear how that house sounded and then wanted a real studio with acoustics. Ultimately, that’s how we ended up here.

Matt Chamberlain getting drum sounds in Studio A at Fairfax Recordings
Talk a little bit more about taking over the Sound City Studios. How did that come about?
I worked here a handful of times over the past 15 years. When it was a commercial studio, I’d come here to cut drums. This was known as a great drum room. I was friendly with the owners and, about five or six years ago, my studio was in North Hollywood. A friend of mine who works here a lot came to me and was like “Did you know Sound City is available?” and I said, “No.” I was looking for a new spot and the studio is kind of out in the middle of nowhere in the Valley. So, it’s not like renting a studio in Hollywood, which would be much more expensive. I wanted this room so bad and wanted the sound of it. It’s the sound of the room. Some great records have been made here and I was hoping to add to that.

You have a minimalist aesthetic here at Fairfax Recordings. What’s the inspiration behind that?
I went through this arc where I started recording when I was younger, got curious about gear and what it did and how it affected sound. Then I went through this crazy process of trying to experience everything and, at some point, you end up with a ton of gear, which is fine because you’re learning about how things work and experimenting with them. Then you start coming down the backside, or at least I did, and identify what worked for me and what didn’t. One thing I know is I don’t like to have things around if I’m not using them. I wanted to make it about what I was using and less about having all these options.

What are some of the pieces of gear that really inspire you at Fairfax?
I love our consoles. The Altec 9200 has been incredible. The Spectra Sonics is an amazing board. They are both great consoles. Our mics collection is great, that’s something I’ve curated over the past 20 years or so. We have very specific mics that we use for specific reasons. Our Scully 16-track, which I love, it really brings a lot to the recordings. Having a tape machine is a great thing.

What is it about the process of recording that you love the most?
It’s constant problem solving. It’s a chew toy for the brain. There is never a moment where you’re not trying to solve a problem and the word doesn’t necessarily mean a bad thing. It’s just that you’re constantly creating and trying to figure something out. It keeps your brain going. It’s fun. It’s like a big puzzle. If you’re not problem solving, I think there is something wrong. If you’re just cruising along, you’re not doing the best you can. You should always be finding something you can improve upon in the recording process. To me, that is super exciting. That’s life. If you’re not in the moment and moving forward than what’s the point?

If you're unfamiliar with some of the incredible projects that Kevin Augunas has worked on, we've culled together a few choice tracks for you to check out. Continue below to find a selection of songs from The Lumineers, Nick Waterhouse and Cold War Kids, that have been made with the help of Kevin.