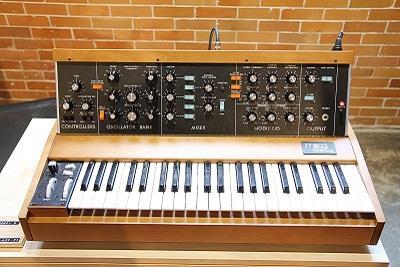 Update 8/30/2016: Klayton (Celldweller) was recently given a Minimoog Model D reissue to create an even more in-depth demo video. Watch the video above to hear the synthesizer's classic sound and discover more about the modern advances made to the synth's design.

As one of the first synthesizers to be readily available to the general public, the Moog Music Minimoog was designed by Robert Moog and Bill Hemsath to be a more performance-friendly instrument than the large modular synths used in recording studios. The Minimoog Model D (the model the new production will be based on) was released in 1971 and was actually the fourth different version of the synth. This synthesizer featured hand-wired components including a 4-pole low-pass filter, three oscillators and an A-440 tone generator, which helped the Minimoog become a favorite of artists like Kraftwerk, Gary Numan, Rick Wakeman and many more.

- Moog Music has not changed the sound engine from the original Minimoog Model D.

Check out more photos below, an announcement video featuring Klayton (Celldweller), and a full-on product breakdown with Synthtopia and Moog Music's Nick Montoya!