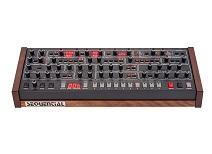 AES 2015 is on and there have already been some big announcements today. The trend of bringing essential gear down to a smaller size continues with Dave Smith Instruments creating a modular version of the amazing Sequential Circuits Prophet-6, the Prophet-6 Desktop Module. Once again Dave has built a masterful unit, which keeps intact the power and sound behind his larger synthesizer.

Built using the same analog signal path with discrete VCOs and VCFs, the Prophet-6 Desktop Module features high-quality digital effects and a poly chain feature which allows for pairing two synths together. That means two Prophet-6s can be used in tandem to create a twelve-voice synthesizer attack.

"The desktop module sounds every bit as good as the keyboard because, on the inside, it’s exactly the same — the same VCOs, VCFs, and VCAs and the same classic, punchy, analog poly sound that’s been earning raves from customers and reviewers,” says Dave Smith about his latest creation.

While some might assume that a smaller unit means you'll have a harder time controlling your sound, the Prophet-6 Desktop Module brings the same exact knobs and switches to its build as the original Prophet-6. This means you won't need a microscope to ensure that you're dialing in the sounds that you want, no matter whether you're performing in a live setting or in the studio.

The new Prophet-6 Desktop Module costs $2,199.00 and will be shipping directly from Dave Smith Instruments. Watch the video below to see a demonstration of the unit from Dave.