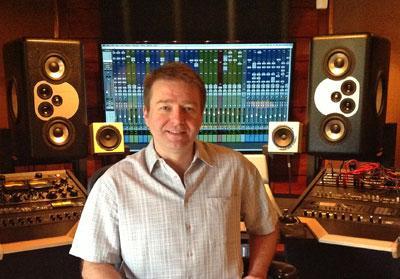 In the world of country music, few Music City producers and engineers have shined as brightly as Matt McClure has recently. Scoring two number one hits with Lee Brice's "Hard To Love" and "I Drive Your Truck" in 2013, McClure has continued to build out his resume by working with some of the best songwriters in Nashville, including Tom Shapiro, Tony Martin and Rodney Clawson.

When it comes to cities like Nashville, quality recording studios seem to be about a dime a dozen. So, what keeps the biggest names in songwriters, like Ben Glover, Terry McBride and David Lee Murphy, coming back to McClure's studio, The Roost? It's simple. His pristine choices when it comes to gear selection. One of McClure's recent purchases for The Roost includes a few Barefoot Sound's MiniMain12 monitors, picked up via Vintage King.

"The listening position is spot on and I just did a little bit of tweaking and man, the first listen would blow your mind," McClure states of the MiniMain12 monitors. "They're ridiculous. I have worked in all of the big installs all over this town and my control room sounds as world-class as any of them."

Created by Barefoot in collaboration with Bruno Putzeys of Hypex, the MiniMain12 is centered on seven drive units and a four-way active system. With a highly detailed tweeter, aluminum cone subwoofers and midranges, these monitors are capable of kicking out perfect sounds at every frequency, while also keeping distortion to a minimum. In addition, the system features a brand new DSP crossover that allows the same listening experience up close as it does a few feet away.

While these qualifications alone make the MiniMain12 special, Barefoot Audio continued to push the monitors further by giving them a new type of innovative technology. Dubbed MEME, short for Multi Emphasis Monitor Emulation, these monitors have the special capability of replicating the sounds of other speakers. By leaving behind the stress of constantly plugging in and unplugging different sets of speakers, engineers and producers can listen to their mixes on several different types of settings with the MiniMain12.

“The Vintage King crew, especially Jeff Leibovich in Chicago and Chad Evans here in Nashville, have made tremendous strides in taking care of us,” McClure says of his work with the Vintage King Crew. “Most of the time when I’m calling them, I already know pretty much what I want. I don’t need someone trying to steer me in a different direction because there’s a product that’s being pushed on the shelves and they’re going to get more commission. That doesn’t happen with Vintage King.”

Bonus: Learn more about the MiniMain12 from the man who created the monitors himself, Barefoot Audio's founder Thomas Barefoot.