JHS Pedals Colour Box Brings The Console To Your Amp 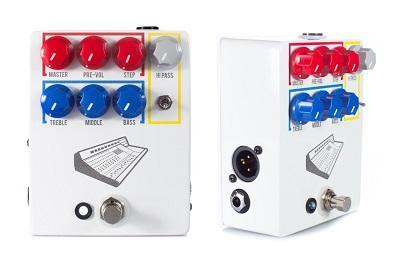 While pedals have always gotten the glory, the true stars of crunchy guitar riffs like The Beatles' "Revolution" and Led Zeppelin's "Black Dog" were the consoles used during recording. By plugging directly into the console and adjusting the gain and EQ, recording engineers can craft a tone dirtier than most amps or pedals.

As a part of the evolution of this unique style of distortion and fuzz, JHS Pedals has created the Colour Box pedal. Using 100% analog circuitry, the JHS team designed this pedal based on the classic Neve designs that fueled many of the 21st century's major recordings. For the first time, these "direct in" tones are finally available for players to use in the live setting via an amplifier and the Colour Box.

With the Neve 1073 in mind, JHS set about recreating similar gain stages, even taking it a step further by introducing two of them into the pedal. Pulling in a resounding heaviness from a Luhndal transformer, the pedal offers fat lows that are perfect for recording drums and bass. The Luhndal also allows the pedal to handle mid to high frequencies extremely well, giving players the ability to smooth and round their sound until finding the right tone.

Another unique aspect to the JHS Colour Box pedal is its versatility and ability to cut tracks with just about any instrument possible. Offering an XLR input, in addition to the standard 1/4 jack, pedal owners can plug straight in and mic an amplifier or their instrument itself. With such a wide range of sounds available, the Colour Box is perfect as a preamp for vocals and for delivering simple-yet-crucial distortion on guitars.

The JHS Colour Box is a unique pedal that can bring a lot of different flavors to your recording session or live show. Check out Pete Thorn's demo of this new pedal and find out just how versatile these "direct in" tones can be.