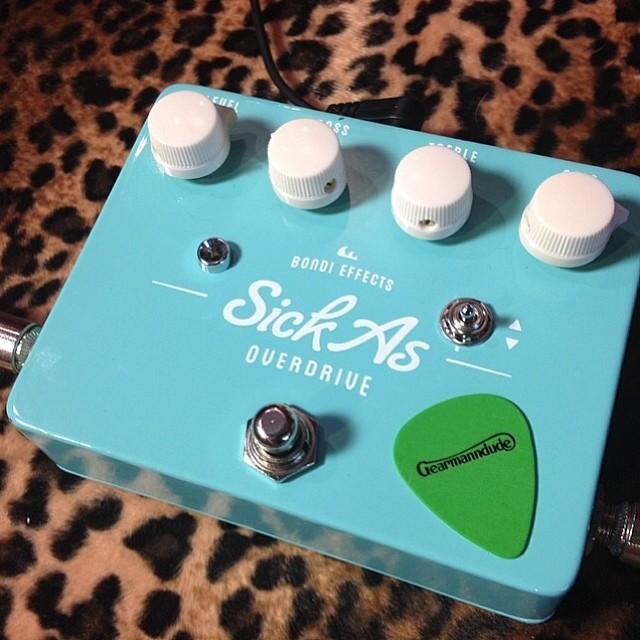 While some guitarists search the world over for the dirtiest sounding fuzz pedals they can find, there are others who pride themselves on a clean overdrive tone that doesn't detract from their songwriting. Imagine tracks like George Harrison's "Wah Wah" or Electric Light Orchestra's "Do Ya" played through extreme distortion. These songs wouldn't be known if not for their simple overdrive sounds, replicated today by the Bondi Effects' Sick As pedal.

Created by Jon Ashley, a native Australian now residing in Kentucky, Bondi Effects strictly started as a hobby. Ashley learned the basics at a tender age before officially launching the brand in 2013. He now kicks out Sick As pedals for guitarists all over the world, handling each high end build by himself.

"I started building pedals when I was in high school. When I was younger, I was really into building Battlebots," Ashley says. "When I got older I realized girls would probably not be as into Battlebots as they would guitar, so building guitar pedals was the perfect thing for me to geek out on!"

The best pedals often seem to have an organic sound, which is one of the most alluring parts of the Sick As. Offering a clean boost and overdrive tone, the pedal seamlessly can transition in between both sounds, giving an edge to your sound without being overpowering. The clean boost is perfect for giving solos more power while still maintaining a tone as close to your original sound as possible.

When it comes to the overdrive component of the Sick As, there is a toggle switch that offers two different settings for gain. By flipping up, you will achieve a high gain sound that replicates the classic Tweed amp sound. If you flip down on the toggle, the pedal will offer an expansive overdrive that features more bass and is perfect for playing rhythm tracks.

"The Sick As is perfect for the tone fanatic who wants something different, simple and versatile." Jon says of the Bondi pedal. "It's great for pushing a tube amp into natural tube overdrive, but even running an amp clean and clipping with the Sick As sounds great and very natural."

As the Sick As pedals continue to fly out the door, Jon is looking ahead to the launch of two new pedals, including an overdrive and boost. "The new overdrive will be a twist on the classic TS808 circuit but with the Bondi flavor." Ashley states of his company's future. "If you like your Sick As, you are going to love what's next."

If you're curious to hear what the Sick As sounds like and aren't near our Nashville and Los Angeles storefronts, check out this demo video featuring Pete Thorn and the Bondi pedal.