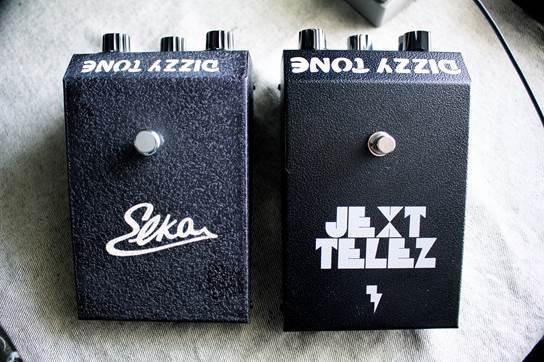 For those that thought the popularity of pedals with pure distortion power were waning, it's probably best that you duck under a table and cover your ears. The new crop of revitalized metal and stoner rock bands have forever brought back distortion pedals and they crave only the heaviest of sounds. From up-and-comers like Fuzz, mid-90s groups like Sleep and perennial favorites Black Sabbath, there is still a need for kick ass pedals like the Jext Telez Dizzy Tone.

Lovingly created by Michigan's Bob Ebeling, the newest Dizzy Tone is a brilliant replica of a pedal originally made by a brand called Elka. Built from 1967 to 1968, the Elka version of the pedal was created in the same facilities where the Italian company made organs. Similar in sound to other fuzz pedals of the era like the Balwin-Burns Buzzaround and Sola Sound Tonebender, the Dizzy Tone offered snarl and extreme bite for heavy hitting guitar players.

"I found it, like many others, by digging deep and getting very lucky. The quest for fuzz," says Ebeling of his discovery of the Dizzy Tone. "A lot of fuzz pedals nowadays are fun at bedroom levels but don't hold up for jack when recorded or jammed with live. This original Dizzy Tone blew my mind in that it just commands at any level."

Check out this video clip of an original Elka Dizzy Tone to get a sense of the tone to come with the Jext Telez:

Having spent over 20-plus years in the recording studio, working to unlock musical secrets, Ebeling was blown away with some of the rare vintage pieces he found. Instead of harboring them for himself, he set about recreating a few of his favorite pedals. "We are building vintage designs that are new because of their rarity," Ebeling states. "It's very rewarding to present our rock brethren with holy tools."

Keeping the signature wedge shape of the original Elka pedal, Ebeling set about figuring out the classic piece of gear the old fashioned way. Pulling apart the original pedal by hand, he measured the components and began to develop the exact board construction for his new model. His result? A pedal with the same power and intensity of the first Dizzy Tone.

Vintage King currently has two different Dizzy Tones in stock, as Ebeling created different models to offer something to all kinds of guitarists:

V1: Offering extreme high-end control, the first of the Jext pedal uses two SFT352 and one SFT308 germanium transistors. These parts fall in line with the rich tradition of the original pedal.

V2: When it comes to transistors, it doesn't get any better than a Mullard OC44 Yellow Jacket germanium transistor. Giving the second version of the new Dizzy Tone a smooth distortion and tone, these transistors are some of the rarest and offer a rich sound. As for what's next for Ebeling, mum is the word at this point, but he promises big things to come. " More super rare fuzzes that you can't believe you've never heard, some other Motown secret stuff too," Ebeling says of his new projects. "We don't want to just put a twist on established stuff, we want to reinvent and create the unknown."
Categories: Guitar, Amps, Pedals & News and Events
Posted By: Eric Allen