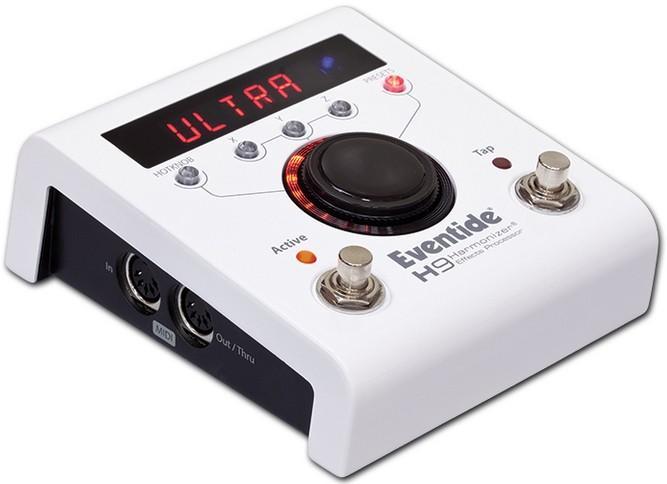 Bringing home a harmonizer pedal that replicates the Eventide rack sounds used by Jimmy Page, Frank Zappa and Eddie Van Halen, is a dream come true for most guitar fanatics. After all, when it comes to the most often replicated guitar tones, these three players are at the top of most lists. With the new Eventide H9 Core and Eventide H9, the dream sound has become much more achievable.

The Eventide H9 Core puts the power of the brand's Harmonizer studio processors, the H910 and H949, into a small, easy-to-use and portable package. Offering a domineering punch that can be controlled by hand or via Bluetooth on your iPad or iPhone, the Eventide H9 Core is also fully customizable. Feel the need to have more advanced sounds than just the H9100 and H949? Eventide algorithm upgrades can be downloaded to the H9 Core, allowing for more sonic experimentation.

Building on the solid base of the H9 Core, the H9 Harmonizer's tagline of "Stombox Re-Thunk" hits the nail square on the head. For players who want all of the sounds available upfront, this processor includes the H910/H949 algorithm and many more of the popular stompboxes that Eventide has created over the years. With nine algorithms included right out of the box (both versions include a coupon for one additional free algorithm), the H9 Harmonizer offers amazing control over distinct tones from yesterday and today.

A unique aspect of both of Eventide's latest creations is that once a H9 Core is hooked to an H9 Harmonizer, the effects processor becomes equal to the later. Thus, you can use any algorithm from your Harmonizer on any of your H9 Cores. When linking together a few of these pedals, you'll have a wider palate to work with.

Enough talk! Curious to see what the H9 Harmonizer and H9 Core sound like? Check out this demo from Vintage King's resident guitar slinger, Pete Thorn, and hear firsthand the brilliance of this new Eventide gear.