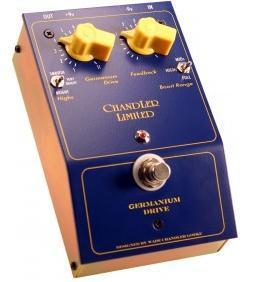 You don't just stumble onto good tone. It takes dedication and finesse to fine-tune the quality of your sound. Yet, no one has made the task easier for musicians and recording techs than Chandler Limited. Celebrating their 15th year in business throughout 2014, Chandler Limited is continuing to kick out some of the best preamps, equalizers, mixers, 500 series and guitar products on the market.

The Chandler Limited story starts with Wade Goeke, the company's founder, who began working on gear in his spare time around 1999. While still holding down his day job, Goeke took on projects that met his ideal vision and sound specifications. “It was just me experimenting and learning,” Goeke says of the early days at Chandler Limited. “I had a great time at it and, in the process, the whole idea of building a company started to take shape.”

After gaining funding from selling his first series of LTD-1 preamps, Goeke continued to push forward with his fledgling company. Building further on the template of Simon and Garfunkel, Bread and The Beatles, Chandler Limited is closely linked with products that replicate the warm sound of analog. In fact, Goeke perfected the sounds of Abbey Road so much that his gear was used in the making of the Cirque du Soleil Beatles-themed show, Love.

Check out the music from Love, whose production crew used Chandler Limited gear during the mixing and recording process.

While Chandler Limited has deep roots in the sound of the late 60s and early 70s, the brand has continued to expand with modern times. Artists ranging from Kings Of Leon to The Strokes have been using Chandler gear like the Mini Rack Mixer, TG1 Limiter, Germanium Preamp/DI and TG2 Preamp/DI in their studios. With a wide range of musicians and studios in his phonebook, Goeke has truly shown how versatile his products are.

Throughout the recording of their breakout hit, "Sex On Fire," Kings Of Leon employed the Chandler Limited TG1 Limiter and TG2 Preamp/DI.

Bonus: Get an inside look at some of the best Chandler Limited products that Vintage King has to offer.