The Box from API Launch Event Wrap Up 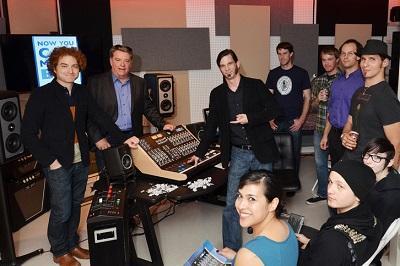 Coinciding with the launch of The Box, NYC’s Heavy Melody Music ordered three consoles for their studios. “Composer and sound designer Neil Goldberg is one of the partners and he had a nicely outfitted studio, but asked us how The Box would fit into his rooms,” commented Jacob Schneider, VK sales rep. “He was struggling with a bunch of summing mixers, monitors, control units, and pre amps but with The Box he found he could cover all of these needs right in one Box.”

“We had a great turnout and loads of enthusiasm for The Box events at Vintage King Los Angeles and Vintage King Nashville,” remarked Dan Zimbelman, API’s Director of Sales. “While in LA, we also shot a short video for those who couldn’t be there in person.”

“The Box offers an easy, turnkey solution for recording and mixing,” said API President Larry Droppa. “It’s a great option for people who record a few channels at a time, but demand the warmth and punch that a large API console delivers. In addition to four inputs, full center section control, and 16 channels of API’s famous summing, the icing on the cake is a classic API stereo compressor on the program bus. Now you can truly record and mix – in The Box.”

See a slide show of the VKLA launch here.

See a slide show of the VK Nashville launch here.

Categories: News and Events
Posted By: Brian B.