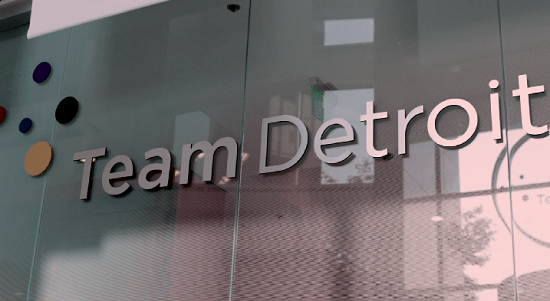 Powerhouse ad agency Team Detroit knew they were reaching the end of the line with their existing Pro Tools system. With a roster of elite clients and work regularly reaching the global market, they wanted a newer, more powerful post-production setup.

After bringing in a number of vendors, Team Detroit elected to partner with Vintage King Audio's VK Post team, a seasoned group of audio professionals specializing in serving the post and broadcast market.

"My passion is gear and it was obvious when we talked to Vintage King that that's where their passion is," says Dan Verlinde, Team Detroit Senior Audio Engineer. "It's not really about the sale and making the commission, it's about the gear, and how you're going to use it and integrate it," notes Verlinde.

Team Detroit's main point of contact at Vintage King was Jacob Schneider, an experienced sales consultant who regularly orchestrates large-scale installations. "When we got the call, we were thrilled for the opportunity to meet with Team Detroit and hear about their vision for the room," says Schneider. "They recognized our passion for the gear right away, and appreciated the expertise our VK Post division offers for these kinds of configurations and installations."

After a series of consultations and a careful gear-selection process, Team Detroit scheduled an installation date and set aside a week for the install, just in case. The VK Post team was able to exceed expectations, getting the entire system up and running in just under three days. Much of the time savings came from extensive preparation in the VK Tech Shop, Vintage King's on-site service center. To facilitate the installation, custom patchbays were prepared in advance and gear was pre-configured as much as possible, then meticulously packaged for shipping.

"Going into the installation, we recognized that Team Detroit has a roster of high-profile clients and we wanted to make sure they could get right back into their workflow, right away," adds Schneider. "We had done so much planning and thinking through on the back end that the install was seamless, allowing the Team Detroit crew to fire up a session and get working on billable projects right after we left."

Team Detroit appreciates the attention to detail the VK Post team paid throughout each step of their consultation and custom installation. In part, it was that above-and-beyond approach that brought Team Detroit to VK Post in the first place. "We needed support from a company that would give us minimal down time and be there when we had issues," adds Dean Dolce, Team Detroit Broadcast Systems Engineer.

Categories: Post & News and Events
Posted By: Brian B.