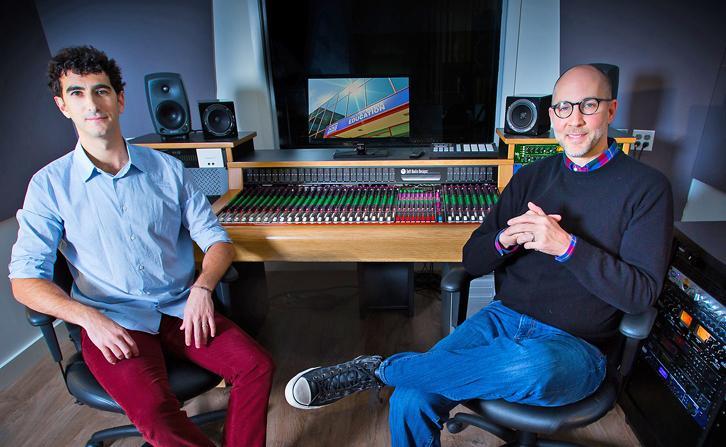 SAE Institute sat down with Vintage King's own, Jeff Leibovich, to talk about his history at Vintage King, Chicago music influences, and more.

Jeff, thanks for being with us! You’re SAE’s Comfort Food Series first interview EVER! With such a well reputed track record that VKA has, I’m sure this will be easy.

What’s your background at VKA and what makes Vintage King so rad?

Well, I started at VK back in 2007, while I was still attending my last semester in the PAT (Sound Engineering) program at the University of Michigan. Don’t hold me to this, but when I started, I think the VK team was about 12-15 people tops. It’s been amazing to watch this company grow to the 60+ person staff scattered throughout Detroit (home base), LA, New York, Nashville, Boston and of course, right here in Chicago. I was also lucky enough to be Mike Nehra’s (co-owner) assistant and learn from the man himself. The thing I think I took most from Mike was who he treated people when discussing gear with them. He wasn’t just looking to make a sale; he wanted to make sure people got the best gear that fit within their budget. Be it a one off purchase to a full studio build out, Mike always made sure to find out exactly what the customer had in mind for their studio and made sure the gear they purchased fit that vision. Since then, I have grown into sales and business development here at Vintage King and have been lucky to work with some amazing names in the industry. I’ve worked and continue to work with engineer/producers like Michael Brauer, Rich Costey, Johnny K, Needlz, Matt McClure and musicians like Green Day, Dave Grohl, Lenny Kravitz, Ryan Adams, Kanye West and plenty of others.  I think what makes VK so special and rad is the culture that Mike and Andrew (brother owners) of VK have instilled. We treat all our clients, vendors and each other the way we’d want to be treated. Of course, the great gear selection, knowledgeable and friendly sales crew, phenomenal customer service and our team of techs is what really sets us apart in my humble opinion in terms of ‘gear shops’.

Vintage King seems all about enhancing the music industry by generation collaboration.  In your opinion, what’s the importance of fusing the new with the old when it comes to equipment?

I think people will never walk away from certain analog pieces of gear, but at the same time, with the DAW and working on a computer, there are so many possibilities and opportunities to stretch audio/music. There is definitely a resurgence of Tape and Vinyl out there and the ‘classic sound’. People love the classics and want their stuff to sound like that. People like to use the ‘old school’ equipment to get those tones everyone loves and then use ‘the box’ to take their craft to another level. The combination of the best of both words, Analog/Digital, makes an amazingly powerful and satisfying recording system.

Gazing at your site, you have some phenom. new inventory.  What piece of gear puts the icing on your audio cake?

This is a near impossible question to answer, but I think the piece I am most lusting after right now and want to add to my studio is either the Shadow Hills Mastering Compressor or the Burl Mothership convertor (ideally setup with 24 AD and 16 DA). It’s kind of an issue that I work at the candy shop. There’s always one more piece of gear I just need to have. I think every engineer can attest to that feeling and I am no different.

Chicago is home to an array of music legends, who are some of your top favorites?

If we’re talking musicians, I love Wilco and have had the pleasure of dealing with them recently (they bought a desk one of my clients was selling). I was also lucky enough to be an intern at a studio one summer here in Chicago while they were working on some tracks for Kanye West and Lupe Fiasco. Of course Buddy Guy, Muddy Waters (does he count as a Chicago music legend), Billy Corgan,the list goes on and it’d be really hard to pick just one. There are also tons of talented bands and musicians that are up and coming here in Chicago. From JC Brooks and the Uptown Sound, to Sidewalk Chalk, Todd Kessler, Jeffrey David, The Congregation, Verzitile, The Right Now, Great Divide (to be a bit narcissistic), DBP Loves You, Sam Trump, Young General, Marcus Rezak, Digital Tape Machine, Polarcode and on and on. The Chicago Music Scene is definitely one I am happy to be a part of. When it comes to audio, I think it goes without saying, Bill Putnam is the tops! But again, there are so many great studios, engineers and producers here in Chicago that I’ve had the privilege to work with, it’d be hard to name just one or even a few as my top favorites.

We’re big supporters of EARS, so our logo should be gracing any events thrown by EARS. AES in NYC is something we’ll be doing. I am working to get a few more Chicago events put together. We did recently host a fun AES Afterburner at SAE. It’s something we like to do after AES to feature some of the hot new toys in a rack and let the guys who didn’t travel to the show have an opportunity to listen and get their hands on the new items released around AES.  We are also looking forward to co-hosting an AVID Pro Tools Launch Event most likely at the CRC.

What shade of green would you call the Chicago River when they dyed it as tradition this past St. Patty’s day? Made up names are totally accepted/encouraged.

It reminds me of the beverage Green River (oddly enough). I don’t know what shade per se, but that is what I think of when I see the St. Patty’s day green river. The soda is still served at Michael’s Red Hot’s in my original hometown of Highland Park.