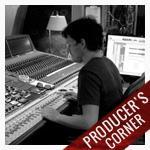 John O’Mahony is a Grammy-nominated mixer and producer known for his indie-rock sensibilities, having worked with such acclaimed artists as Coldplay, Metric, Alberta Cross, Kaiser Chiefs and The Cribs.

Some of John's recent career highlights include mixing and contributing additional production to Metric’s 2009 album Fantasties, which quickly went Gold in Canada. In addition, he mixed Metric’s two previous efforts, tracks on Coldplay’s multi-platinum Viva La Vida Or Death And All His Friends and Depeche Mode's Live At World Cafe.

As part of the mixing team for Viva La Vida Or Death And All His Friends, John was also awarded the 2009 Tec Award for Outstanding Creative Achievement in the category of Record Production / Album. John moved from his native Ireland to New York City in 1998 to work as a staff engineer for the infamous Chung King Studios for three years.

In the summer of 2001, John became an independent engineer splitting his time between mixing albums alone and engineering for legendary mixer Andy Wallace. John first began producing when Metric front woman Emily Haines enlisted him to produce, engineer and mix her critically acclaimed solo album Knives Don't Have Your Back.

"It's a really exciting time for audio technology, there are still a few classic pieces I love but today's business calls for zero downtime and reliable recall ability so I'm finding myself using more modern designs that have been inspired by the vintage legends."

1. Pro Ac Studio 100's
I can work on these for hours before listening fatigue kicks in.

3. Neve 2254
This is one of the few vintage compressors I use because it sounds incredible and looks like it came out of an old Submarine.

4. Empirical Labs EL8 Distressor
Versatility. If I could only ever have one compressor this would surely be it.

5. AMS DMX
This sounds amazing but will break your heart, get it serviced asap!!

6. ADR Panscan
I've still not heard a Plug In panner that sounds as rich as this.

7. EMT 140 Plate Reverb
It's noisy but classic. Check out #5 at Electric Lady Studios in New York.

8. Bricasti M7 Reverb
No matter how dense the mix gets I can still hear this reverb sing through.

9. Tube-Tech CM1A Compressor
Tube-Tech lent me a pair of these for a record in Copenhagen. It's the punchiest tube compressor I know.

10. Chandler Germanium Tone Control
This is the thickest EQ in my rack, amazing on a snare drum.